Elite runners tend to develop atrial fibrillation Could that be because of increased levels of microRNA as the heart tries to cope with the stress? A German team found intriguing findings in marathon runners. 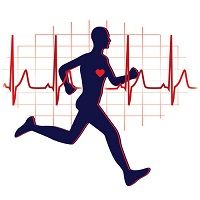 Physical activity is beneficial for individual health, but endurance sports like long-distance running are associated with the development of arrhythmias such as atrial fibrillation.

MicroRNAs are important mediators of pro-arrhythmogenic remodeling. That could mean they have potential value as biomarkers in cardiovascular diseases.

To see if levels of MiRNA in plasma changed with exertion over time, a research team in Munich, Germany recruited 30 marathon runners and classified them according to how much they ran.

Writing in PLOS1, Sebastian Clauss and colleagues at the Ludwig-Maximilians-Universitat Munchen, Munich, Germany and colleagues there and at other institutions found these levels are indeed significantly increased when athletes train for a marathon.

MicroRNA levels did go up, and thus these measurements could potentially be useful in tracking athletes’ risk of developing atrial fibrillation due to intense and prolonged cardio activity.

All runners in the study participated in a 10-week training program before the marathon and MiRNA plasma levels were measure at baseline, two times during training, and immediately after the marathon.

“We demonstrated a significant increase of miR-1, miR-30a and miR-133a immediately after the marathon with return to baseline 24 hours later,” they wrote.

The levels in the elite runners who trained and ran the most increased the most, though those levels increased in all the subjects.

“MiRNAs were differentially expressed in the plasma of marathon runners with more pronounced changes in elite runners,” they concluded, “Plasma levels in elite runners correlate with left atrial diameter suggesting that circulating miRNAs could potentially serve as biomarkers of atrial remodeling in athletes.”.

The study was somewhat limited by the fact that there were only 30 participants, they noted, but “this is the largest cohort of athletes for whom circulating miRNAs have been evaluated so far,” they said.

Atrial fibrillation (AF) has the highest prevalence in people older than 60, and the average age of subjects in the study was 40.

“Our data are not evidence of a causal link between circulating miRNAs and development of disease but should rather be seen as an indicator of acute cardiac adaption in response to exercise” they wrote.

“These [findings] are hypothesis-generating and do not prove a direct causal link between circulating miRNA levels and development of AF in athletes,” they noted, but the data “may however be seen as a potential indicator of atrial remodeling that may or may not result in future disease.”