Before phosphodiesterase-5 (PDE-5) inhibitors were developed, treatment of erectile dysfunction (ED) was difficult and remained in the realm of the urologist. The approval of the first effective oral agent for the treatment of ED in 1998 focused the attention of the medical profession on the magnitude of the problem of ED and its effect on the quality of life of affected patients. Because patients are reluctant to broach the subject, physicians who can now offer effective treatment should.

In his overview, Dr. Kloner (page 35) summarizes the evidence that ED is related to endothelial dysfunction in most patients. Endothelial dysfunction is also known to be an early stage in the development of arterial and arteriolar disease, including coronary artery disease (CAD), carotid and cerebrovascular disease, peripheral vascular disease, and hypertension. We have also known for some time that the risk factors that are associated with an increased prevalence and incidence of CAD act by injuring the endothelium. It is not surprising, therefore, that the same risk factors are involved in the endothelial damage that results in ED, making it an early form of arterial disease, as the study by Kaiser and colleagues1 showed. Another study indicating that these risk factors presage ED was reported by Fung and colleagues.2 They evaluated a population of men for the presence of risk factors for CAD from 1972 to 1974. In 1998 they found that the patients who had risk factors 25 years before had an increased prevalence of ED compared with those without risk factors. It seems probable that controlling the risk factors before ED becomes clinically evident might prevent the development of ED, and possibly other arterial diseases. There is no strong evidence, however, that the disease is reversible with the control of risk factors once the arterial disease, either ED or other forms, is present.

Penile erection depends on smooth muscle relaxation in penile arterioles and cavernosal lacunae. Smooth muscle relaxation occurs because nitric oxide released by the 3,5¢-cyclic guanosine monophosphate (cGMP) and through a cascade of actions, removes calcium from the contractile elements of the smooth muscle. Because sildenafil, vardenafil, and tadalafil all work by inhibiting the PDE-5 enzyme and thus preventing the breakdown of cGMP, any contribution of organic nitrates that can be bioconverted into nitric oxide can significantly increase cGMP and prolong or magnify smooth muscle relaxation and vasodilatation. In some individuals this can result in a marked drop in blood pressure, which is the basis for the contraindication for use of organic nitrates in patients taking PDE-5 inhibitors.

of most of the side effects of the drugs: headache, nasal stuffiness, and esophageal reflux. Dr. Kloner notes that clinically important vasodilatation occurs in such diseases as primary and secondary pulmonary hypertension, where more marked and selective drops in pulmonary vascular resistance and pulmonary artery pressure occur compared with systemic vascular resistance and systemic arterial pressure. This is probably related to upregulation of PDE-5 in the pulmonary circulation in patients with those diseases. It is hoped the PDE-5 inhibitors will be therapeutically useful in this disease.

Most of the cautions mentioned in the ACC/AHA Expert Consensus Guidelines in 19993 were the result of the exclusions from the randomized, placebo-controlled trials of sildenafil available at that time. Since then there have been extensive reports on the safety and effectiveness of sildenafil and, with lesser experience, of vardenafil and tadalafil, in the general male population with ED, as well as in more specific populations (eg, patients with CAD, hypertension, diabetes, and congestive heart failure).

Because certain antihypertensive and antidepressant drugs can cause ED, one approach would be to discontinue or substitute other drugs to see if the ED improves. However, if the drugs are effective and have no other adverse effects, a better approach would be to see if the ED responds to a PDE-5 inhibitor and continue the effective drug. Dr. Kloner discusses the relative and absolute contraindications to the use of PDE-5 inhibitors with some cautions: alpha-adrenergic blockers, drugs used in both hypertension and, more importantly in the age group of interest, in benign prostatic hyperplasia. Although the studies showing a marked drop in blood pressure in some patients with

the combination of these two drugs

are small, the Food and Drug Administration recommendations are those that the medical profession must follow.

The double-blind, placebo-controlled trials, the experience with the open-label studies, and the prescription-monitoring studies are all convincing that total death, acute myocardial infarction, and stroke are no more frequent in patients taking PDE-5 inhibitors than in those not taking them. There is a small risk of acute myocardial infarction occurring within 2 hours of sexual activity, however, which is probably related to the increase in physical activity and myocardial oxygen demand. For the majority of men, the increase in metabolic equivalents (METs—where 1 MET is the VO2 uptake at rest) is 3 to 5 METs, a modest increase in VO2. The Princeton Conference4 referred to by Dr. Kloner categorized patients with cardiovascular disease into low-, intermediate-, and high-risk groups. Those with high risk must have their cardiovascular disease evaluated and controlled before engaging in the physical activity associated with sexual intercourse. The low-risk group can have their ED treated without further cardiovascular workup, whereas the intermediate-risk patients should have their capacity to exercise to the extent demanded by sexual activity evaluated before being treated for their ED. This algorithm will be further modified as a result of a conference held in June 2004. The physician should remember that the increase in myocardial oxygen demand occurs in the partner as well as the patient with ED, and their risk of increased sexual activity should be considered.

ED is an arterial disease and should stimulate examination of the patient for other, more serious, unsuspected arterial disease. Conversely, patients with clinical coronary artery and other arterial diseases should be questioned about possible ED, since the successful treatment of ED can, in some patients, markedly improve their quality of life. 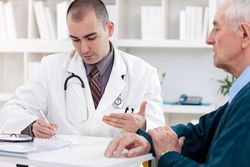