To be young and African-American with a connective tissue disease, such as rheumatoid arthritis, means possibly facing a greater risk of developing some types of heart disease. 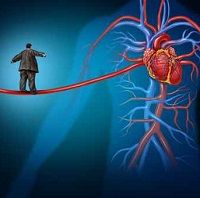 To be young and African-American with a connective tissue disease, such as rheumatoid arthritis, means possibly facing a greater risk of developing some types of heart disease.

These findings come from a University of Chicago study comparing race, age, and sex as factors in the prevalence of connective tissue diseases and atherosclerotic heart diseases, which share the characteristic of systemic inflammation.

Until now there has been a “dearth of formal understanding on the interactions of race with connective tissue disease [CTD] in determining cardiovascular risk,” said the study’s author, Francis J. Alenghat MD, PhD. He is a cardiologist and an assistant professor of medicine at the University of Chicago.

His cross-sectional, retrospective analysis of a group of Chicagoans revealed that African-Americans with CTD had more than twice the prevalence of atherosclerotic cardiovascular disease (ASCVD) than did white patients with CTD (29.7% to 14.7%). When age was taken into account, young African-Americans between the ages of 18 and 44 had ASVD along with CTD (prevalence 9.1%), which was 4.7 times more frequent than their white counterparts with CTD (prevalence 1.9%). These differences were regardless of sex.

“Young African-Americans have a particularly notable association between CTD and ASCVD, and the explanation is not known,” the study said. “It is possible that the types of CTD in these patients are particularly aggressive, less adequately treated, less amenable to treatment, or associated more strongly with traditional risk factors.”

Both African-American and white middle-aged patients from 45 to 64 years old with CTD did not escape ASVDs either, but the African-Americans continued to have a higher prevalence ASVD. For those 65 and older the difference in prevalence was narrow.

“If we were to view the current findings on the backdrop of contemporary cardiovascular risk calculators and statin guidelines, many patients with connective tissue disease could reasonably consider moderate-intensity statin therapy at age 35,” Alenghat said. The study also suggested that early risk factor identification and control of inflammation in CTDs, especially in young patients, were important to prevent ASVDs.

Alenghat’s findings are based on his examination of de-identified medical records for 287,467 white and African-American patients at the University of Chicago medical center from 2008 to early 2014. In the sample, 8,747 had CTDs and 26,750 had ASVDs. Rheumatoid arthritis was the most common CTD in the sample, which also included patients with systemic lupus erythemtosus, Sjogren syndrome, dermatomyositis, other inflammatory polyarthropathy, and unspecified diffuse or mixed connective tissue disease. Only cardiovascular diseases attributed to arthrosclerosis were counted. These ASVDs included myocardial infarction, coronary artery disease, or athrosclerosis of any artery.

“The data support the association between ASCVD and CTD, and they lend credence to regarding CTD as a risk factor for ASCVD,” the study said. Alenghat also “uncovered a difference in the strength of the association of CTD with ASVD between two major racial groups in the United States,” the study added.

However,he added, “The extent to which the differences between races observed here reflects social or healthcare differences is unknown…Socioeconomic status could be involved in the observed difference as well.” The study noted that it did not have any information on the impact of genetic factors.

The study appears in the February 4 issue of Scientific Reports, an open access Nature journal.