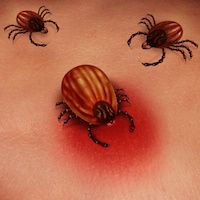 The CDC and state health departments in Minnesota, North Dakota, and Wisconsin are currently seeking to learn more about B. mayonii.

Initial findings from the CDC and Mayo Clinic in Rochester, MN, showed the illness caused by the new bacteria is similar to the original Lyme disease-causing bacteria — Borrelia burgdorferi (B. burgdorferi). Both result in fever, headache, rash, and neck pain in the first days after infection, and arthritis weeks after infection.

However, reports show that B. mayonii also causes nausea and vomiting, widespread rashes, and higher concentration of bacteria in the bloodstream.

To better understand the diseases triggered from the bacteria and the areas populated with the infected ticks, the CDC has funded a three-year program to collect up to 30,000 specimens from individuals even suspected to carry the tick-borne illness.

Existing Lyme disease detecting tests like polymerase chain reaction assays (PCR) also work for B. mayonii and the same antibiotics can be prescribed to treat both.

Awareness about preventative methods is still key. Bobbi Pritt, MD, director of the Clinical Parasitology Laboratory, Mayo Clinic, commented, “The public should continue to take the recommended precautions against tick bites, as Lyme disease and other tick-borne disease are well-established in much of the Northeast.”