After transmission, the HIV virus isn't as infectious as previously believed, research conducted by McMaster University, Yale University, and University of Texas at Austin suggested. 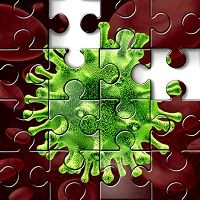 After transmission, the HIV virus isn’t as infectious as previously believed, research conducted by McMaster University, Yale University, and University of Texas at Austin suggested.

"An open question is how much potential there is for treatment programs to protect whole populations from HIV, by interrupting transmission of the virus," Jonathan Dushoff, an associate professor of biology and an investigator with the Michael G. DeGroote Institute for Infectious Disease Research at McMaster University said in a statement. "An important concern here is how infectious early-stage HIV patients are because it will be extremely difficult to find and treat most patients while they are still in the early stage."

To measure infectivity, the team employed several methods. The first entailed creating viral load trajectories and viral load-infectivity relationships which would track the infection over time. Using Bayesian computation, the authors then calculated the relative hazard of transmission during the acute phase versus the chronic phase (RHacute) and the acute phase duration (dacute) of the Rakai retrospective cohort.

Also using the previous data from a study involving serodiscordant heterosexual couples in Rakai, Uganda, the investigators accounted for biases including lack of follow-up, failure to factor in risk heterogeneity, and couple dissolution.

In doing so, the team found the excess hazard-months attributable to the acute phase (EHMacute) was 8.4 (95% CrI: -0.27 to 64), significantly lower than previously published research and in agreement with their viral load trajectories, 5.6 (95% confidence interval: 3.3—9.1).

According to the news release, their study shows past reports could have overestimated HIV’s infectiousness by 20-fold. While the study’s principal author, Steve Bellan said these are optimistic findings, it also underscores a possible change in how HIV is treated on an individual and communal level.

“These revised estimates should be considered when designing population-scale interventions and communicating individual-level risk in clinical or community settings,” the team concluded in PLOS Medicine. “It is becoming increasingly clear that infected individuals should initiate antiretroviral therapy (ART) as early as possible both to achieve the greatest reductions in transmission and for its direct clinical benefits. Our findings cautiously suggest that the population-level benefits might be larger than predicted by earlier estimates.”