A novel therapeutic approach to multiple sclerosis (MS) patients may be effective in reducing brain inflammation. 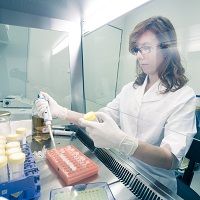 A novel therapeutic approach to multiple sclerosis (MS) patients may be effective in reducing brain inflammation, according to findings published in the Journal of Neuroinflammation.

Researchers from the University of Alberta Faculty of Medicine & Dentistry in Canada observed human fetal neurons and lymphocytes in 10- to 12 week old female mice in order evaluate the effect of the serine protease granzyme B (GrB) inhibition in mice models of MS. Previously, the researchers demonstrated that GrB was a mediator of axonal injury and neuronal death, backed by other studies that suggest inflammatory cells influence the pathogenesis of MS likely through the use of GrB.

“We can interfere with some of the weapons these cytotoxic cells use to induce damage to the nerve cells in the brain, but without disrupting the other positive functions that these cells have,” senior author Fabrizio Giuliani added in the statement. “This molecule, serpina3n, will block the damage caused by GrB that induces the neurodegeneration in this disease, and the neurodegeneration strongly correlates with the disability.”

Additionally, the researchers argue that targeting GrB can slow the progression of MS. The disease does not disappear completely in their models, Giuliana continued, and the disease is still there.

However, there is not as much damage in the nerve cells to indicate or induce permanent disability.

The GrB functioned as a “weapon,” the study authors said, by damaging nerve cells and other components in the brain. When they suppressed GrB using serpina3n, a recently discovered inhibitor, the progression of MS in both human cells and preclinical models was slowed.

“The importance of this is that you can see where it’s leading,” concluded Giuliani. “You can see almost an immediate target. This could eventually open the door to a new stream of treatments. If we can induce neuroprotection, there is a good possibility we can decrease the rate of disability that is associated with inflammation in the brain. If it works as we think, this will make an impact on the treatment of MS patients.”