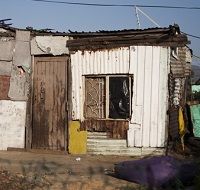 Getting patients in impoverished areas to like parts of South Africa to comply with drug regimens can be a challenge.

Seizing on the fact that even though these residents are poor and may live in shanty towns, they tend to have cell phones, researchers tried texting a large group of Cape Town patients who had high blood pressure.

The team wanted to see if sending short text messages would improve patients’ adherence to taking their drugs regularly.

Though the health reminder messaging system has worked in some settings and with other health conditions, using it in a low-income population in Cape Town resulted in only modest drops in systolic blood pressure, the team concluded.

The study involved 1,300 patients at least 21 years old who had been diagnosed by a clinician as having high blood pressure.

All had regular access to a mobile phone, despite having monthly incomes of less than $270 (US) and that about a third lived in shacks or other “informal dwellings” including lean-to structures made of plastic and cardboard.

The researcher's hope was that despite these obstacles, the text messages could get the patients more engaged in their treatments, with a goal of preventing strokes and heart attacks.

“This intervention was delivered in a setting where providing health care is challenging,” they wrote.

There was some benefit, but it was modest, they concluded.

There were eight different messages meant to offer encouragement, such as “Your good health is important; please try to do more exercise; activities that make you sweat or your heart beat faster are good for you.”

One was scolding: “Did you know untreated high blood pressure (when you don’t take your pills) puts you at risk for heart disease” and another warned “Please don’t give your meds to people who are not prescribed them.”

They also got “Happy Birthday” texts.

At the end of the tria.l the difference in blood pressure for those who got the texts was “similar to that of intensive face-to-face behavioral counseling.”

The drop in blood pressure “was smaller than anticipated,” they concluded, but added that the approach is inexpensive and should be studied further.