NEW ORLEANS&#8212;An evolving physician shortage is already being felt across the country, and there is no quick fix, says Richard A. Cooper, MD, professor of medicine and senior fellow at the Leonard David Institute of Health Economics, University of Pennsylvania, Philadelphia. In his key note address at the American College of Surgeons (ACS) Clinical Congress, Dr Cooper outlined the implications of the looming physician crisis in the United States, despite the first increase (by 2.3%) in first-year medical school enrollees in decades just reported by the American Medical Association for 2006.

"We have a physician shortage that is deepening, and the consequences will be severe," Dr Cooper says.

Framing the need for physicians in the context of the major forces that drive demand (Slide 2), Dr Cooper said, "With ever-expanding possibilities for beneficial services&#8212;and with an insatiable appetite for healthcare among the public&#8212;it is the level of economic growth that ultimately determines how much healthcare the nation can afford. And it is the amount of healthcare that the nation is able to purchase that determines the demand for physicians. This relationship between economic growth and the demand for physicians is key in understanding how many doctors we will need to train for the future."

The underlying problem is that there will be too few physicians to meet the projected demand (see Slide 3). Among the many indications that this is already happening are:

The shortage has been building steam for more than 2 decades, and is largely misunderstood by healthcare policy makers, he maintains. It is not, as many believe, due to inefficiency and inequitable physician distribution. The high demand for physicians in urban areas, for example, results from the interplay of affluence, which fosters advanced healthcare services, and poverty, which creates a cadre of patients with complex needs that place a heavy burden on the system.

The true root of the problem, however, is a deficiency in the overall supply of physicians, which will not be able to meet the demands brought on by economic forces and the aging population. "The level of economic growth ultimately determines how much healthcare the nation can afford, and this determines the demand for physicians," he said. "We project that in 20 years, the nation will be short 200,000 physicians."

Catching Up Will Be Hard

The current shortage can be traced to a halt in graduate medication education (GME). This started in 1997, "when residency positions were capped at 1996 level by the Balanced Budget Act," and the number of incoming postgraduate year (PGY) 1 residents reached a plateau, where it has largely remained (Slides 15, 16).

Now, the country needs to produce 10,000 more PGY1 positions by 2020, including medical doctors, doctors of osteopathy, and international medical graduates (Slide 17). To do so would require not only an expansion of existing medical schools, but the addition of 75 new medical and osteopathic schools (Slides 20, 21). Only 25 such schools are currently under construction, "and each has been a massive effort," Dr Cooper said, "because there is no national program to foster the development of medical schools."

Even with the new schools, there is no assurance that applications will increase. And if they do, it is likely that more students will be accepted than are financially and academically qualified to attend, he added (Slides 22-24).

Had the 1997 GME freeze not occurred, residency positions would still be increasing by 500 PGY1 positions annually, which would have satisfied the demand, and the country would not be facing this dire shortage (Slide 29). Increasing the number of residency positions by 500 annually starting in 2010 would not begin to meet demands (Slides 30, 31). "We will never fully catch up. We can only narrow the gap," he said.

"We have a looming doctor shortage, a woefully inadequate number of residency positions, a need for major expansion of medical schools, and a crisis in the way medical students are selected, educated, and tested," Dr Cooper says. "Never in history has there been a greater need for leadership from organized medicine, foundations, and government. And rarely before has there been so much complacency, indeed, 'active inertia.'"

And yet, not everyone agrees that more doctors and more healthcare are worthwhile. Based on results of their study, investigators at Dartmouth University suggest that "states with higher Medicare spending and more specialists have poorer quality health care," Dr Cooper says. But although he agrees that more Medicare expenditures indicates poorer populations, and thus higher expenditures, he adds that "states in which per capita health care expenditures are higher have better quality health care" (see Slide 11).

Dr Cooper calls upon US medical organizations and physicians to get actively involved in this crisis and make sure that the quality of healthcare is not compromised for future generations. "If we do not rise to meet the challenges, future generations will wonder what ours was all about," and why did we allow a great profession to stagnate, he says.

That need not happen. "Both the ASA and the ACS are firmly on record that GME must be expanded and that Medicare's caps on GME must be lifted," he says. "It is time for colleagues in other specialties to sign on to these goals so that a broad national consensus can be created."

The medical profession has long accepted the responsibility for ensuring an adequate supply of physicians. Fulfilling that responsibility is an obligation that we must now embrace. 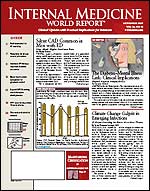