Patients with multiple sclerosis who lose brain volume are entering a phase of greater disability and more severe disease, a study found. 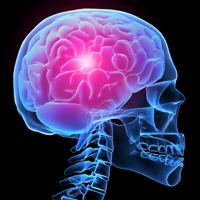 The rate of brain volume loss (BLV) in patients with relapsing-remitting (RRMS) correlated with disease severity and increasing disability, according to a recent study published in Neurology. The authors reported that their findings “lend weight to the importance of BVL, as a measure of disease progression in MS and to the relevance of potential BVL when making treatment decisions.”

These results were based on MRI scans of a combined 3,635 patients in an intent-to-treat population who were involved in three randomized, double-blind studies that were part of phase 3 trials of the drug fingolimod (Gilenya,/Novartis).

The Expanded Disability Status Scale was used to measure participants decline in functioning.

In this study, Ludwig Kappos MD of the Department of Medicine and Clinical Research, Neurology at the VU Medical Center in Amsterdam and an international group of colleagues, looked at the clinical relevance of brain atrophy. Their additional aim was to identify baseline predictors of BVL over time.

Baseline NBV (normal brain volume) “decreased as age, duration of MS, T1-hypointense and T2 lesion volumes, and levels of disability increased,” the study said. It added that “Adjusting for age showed that MS disease characteristics are important independent contributions to BVL… [which] supports the premise that BVL reflects both disease severity and progression.”

T2 lesion volume and Gd-enhancing lesion count were the best baseline predictors of the percentage of brain volume loss (PVBL), the researchers reported. In addition, “Disability progression was confirmed in a greater proportion of patients with high levels of BVL than in those with lower levels.”

BVL happens in healthy people, but more slowly than it does in MS patients. That makes it a “relevant measure of diffuse CNS damage leading to clinical disease progression as well as serving as a useful outcome in evaluating MS therapies,” the authors said. They noted that RRMS patients who received .05 mg of fingolimod during the three phase-3 trial drug studies annually had a BVL that was one-third less than those in the comparison groups.