Reuniting dog handlers with their canine combat companions might help service members with post traumatic stress order. Or would it? 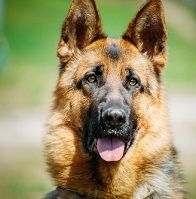 Reuniting dogs and soldiers? Talk about a feel-good project.

An American Medical Association delegation’s proposal to support reuniting retired combat dogs with their handlers looked like an easy winner.

Who could object to seeing battle-weary canine heroes returned to their human partners?

But today at the AMA’s annual meeting when the measure came up for discussion, there was strong opposition.

One issue is that the resolution assumes that such reunions are therapeutic for service members suffering from post-traumatic stress disorder (PTSD).

That assertion did not sit well with delegates representing the American Psychiatric Association (APA).

“PTSD is a very serious matter, however it is grossly unclear there is evidence that military service dogs contribute [to healing],” said a delegate from the APA.

Others objected that the US Department of Defense already has adopted a plan that handlers be given first right of adoption when a combat dog retires.

Representing the US Air Force, delegate Col. Daniel Shoor said these dogs are also considered service members, and that like their human handlers the dogs too can develop PTSD from their combat experiences.

Shoor, Chief of Medical Modernization and Chief of Air Force Medical Modeling and Simulation Training, said studies done at Lackland Air Force Base in Texas, where many of the dogs are trained, showed that happens to about 10% of the dogs.

In an interview after the meeting, Shoor said that as a dog-lover himself, he understands that there are many situations when a dog handler with PTSD being reunited with his combat dog would be therapeutic.

Also, he said , there are certainly cases where it would be helpful to a dog suffering from PTSD to be reunited with a handler who did not have the disorder.

“But what if you have a dog with PTSD and a handler with PTSD,” he said, “Then you’ve got two service members who need help.” So far there’s no research on how that would work out.

He and others pointed out that combat dogs, referred to as working dogs by the military, are not service animals trained to help people with disabilities. Their training is centered on finding battlefield hazards and other combat-related tasks.

Delegates from the APA were also concerned that the measure would be a diversion from the serious and difficult task of finding effective PTSD treatments.

At last month’s meeting of the APA in Atlanta, GA, helping these veterans and service members was a major concern. Even Gen. Robert Neller the top commander of the US Marine Corps asked for psychiatrists’ help in coming up with better treatments, and a advocates including former Massachusetts’ First Lady Kitty Dukakis urged the Veterans’ Administration to consider making better use of electroconvulsive therapy as a treatment for patients suffering from PTSD and at risk of suicide.

But others who spoke at this afternoon’s meeting said the concept of reuniting veterans and combat dogs was worth a try.

Illinois delegate Ken Bush urged his colleagues to approve the resolution “PTSD is skyhigh,” in returning service members Bush said, “Anything that could be done to help service personnel is so important that with or without evidence we should support it.”

Shoor, though officially opposed the resolution, said that he understands why people would think these reunions would help.

When it comes to the bond between dogs and humans, “We like to say that love goes up and down the leash,” Shoor said.