Patients diagnosed with small cell lung cancer have an average life expectancy of 14 to 20 months after diagnosis and results of a recent study show patients with chronic obstructive pulmonary disease who smoke are more likely than others to develop this deadly condition.

Chronic obstructive pulmonary disease (COPD) boosts the risk for smokers to get small cell lung cancer, according to findings published in EBioMedicine.

Researchers from Harvard School of Public Health reviewed 24 studies from the International Lung Cancer Consortium in order to determine how much COPD increases a smoker’s risk of getting small cell lung cancer. The researchers said that even though it is noted that smoking is obviously a major risk factor for lung cancer, the study is original in that it can estimate the risk more precisely than previously possible.

Small cell lung cancer is responsible for about one fifth of lung cancers worldwide, the researchers estimated, and patients have good responses to initial treatment. However, the patients often relapse within one year — typically surviving between 14 to 20 months after diagnosis. 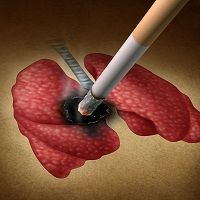 The researchers retroactively examined more than 4,000 patients with small cell lung cancer and nearly 10 times that amount without the disease. Data on patients’ health, gender, age, race, education level, and family history of lung cancer was all collected. The researchers noted smoking status as well, including how old the patient was when they started smoking, how many cigarettes per day the patient was smoking, and how long it had been since the time a patient quit smoking, if they had accomplished smoking cessation.

“This work suggests that we need to tease out the mechanisms by which COPD may increase lung cancer risk in smokers, and to conduct clinical trials to determine whether treating COPD in former and current smokers lessens that risk,” senior author David Christiani, MD, MPH, MS, explained in a press release.