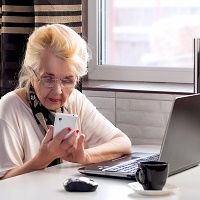 Chronic obstructive pulmonary disease (COPD) patients may benefit from using a digital health application, according to findings published in Telemedicine and e-Health.

Researchers from Temple University Health System observed 79 COPD patients who had been hospitalized for COPD exacerbations in the previous 12 months in order to determine if a telemedicine application for reporting symptoms would be able to reduce barriers between healthcare providers and patients to improve outcomes. The patients had been using supplemental oxygen and had received optimal care while hospitalized.

They were given devices to use the reporting app and assigned to either an intervention or control group. The control group received traditional medical care and was told to seek medical care if their symptoms worsened. The intervention group members were scored by an algorithm in the app, which provided an “alert” if the score was one or more points higher than the original score. Then, they were reviewed by a nurse and referred to a physician who then prescribed appropriate treatment.

The researchers found that of the 39 patients in the intervention group, daily peak flow and dyspnea scores improved. Scoring in those categories did not improve in the control group. There were no differences between the two groups in hospitality or mortality rates, the researchers determined. There were also no serious adverse events reported.

“Previous studies at other sites have questioned the efficacy of various telemedicine solutions in COPD patients, but those studies have not used a solution that enables same day treatment in response to worsening patient symptoms,” principal investigator Gerard J. Criner, MD, explained in a press release. “We have been studying digital health solutions for COPD symptom management for over a decade and are pleased that the improvements we have seen in our patients in response to early identification and intervention has been documented in this clinical study.”

The researchers added that there was an “encouraging degree” of reporting compliance by the moderate to severe COPD patients in the intervention group. Even though the study cohort was small, the researchers believe that the results point in the right direction for future research. Their future research will be aimed at greater patient cohorts using the telemedicine application.