COPD: Why Smokers Are at Risk

Smoking impairs the protective response of immunoproteasome, an intracellular structure that is a key part of immune response. That is likely why smokers are at risk of developing COPD. 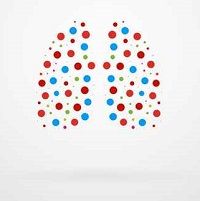 Smoking is a risk factor for developing chronic obstructive pulmonary disease (COPD). In a new study, German researchers have zeroed in on the causal mechanism.

In an article in American Journal of Respiratory and Critical Care Medicine, Silke Meiners, MD, of the Institute of Lung Biology and Disease (iLBD) / Comprehensive Pneumology Center (CPC) at the Helmholtz Zentrum München in Munich, Germany and colleagues wrote that smoking impairs the protective response of immunoproteasome. This intracellular structure has specialized to degrade protein molecules that are foreign to the cell, such as viruses. The immunoproteasome is a cylinder-shaped protein complex

Meiners describes it as a “cellular shredder.”

"We observed that cigarette smoke reduces the activity of the immunoproteasome in human cells," said co-author Ilona Kammerl. "As a result, the presentation of the degraded protein shreds to the immune system does not function properly and thus weakens the specific immune response." Importantly, lungs of COPD patients displayed reduced immunoproteasome activity.

Meiners adds that COPD patients’ lung function declines acutely during a viral infection and sometimes do not completely recover.

“This suggests that the specific immune response to viral pathogens is reduced in COPD patients,”Meiners noted. The data provide the first indications that this is due to cigarette smoke-induced reductions in immunoproteasome activity, the researchers said.

The immunoproteasome could also be suitable as a therapeutic target structure