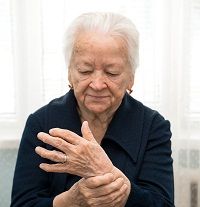 The skeleton is 80% cortical bone, and cortical bone loss contributes importantly to increased risk of fracture. Denosumab has been shown to increase bone mineral density (BMD) at sites of cortical bone, including the 1/3 radius, a skeletal site not responsive to most osteoporosis treatments. Dual-energy x-ray absorptiometry (DXA) measurements over time allow for tracking changes in BMD, a known predictor of fracture risk.

At ENDO 2015, John P. Bilezikian, MD, professor of medicine and pharmacology in the Department of Medicine, Columbia University, discussed the topic of osteoporosis treatment and presented the published results from the FREEDOM trial.

Bilezikian and colleagues examined changes over time in 1/3 radius BMD and wrist fracture incidence during 3 years of placebo administration in the FREEDOM trial and 6 subsequent years of denosumab therapy in the FREEDOM Extension (EXT) trial.

Wrist fractures were monitored in 2207 women who enrolled in the EXT and received placebo during FREEDOM (3 years) and denosumab 60 mg Q6M during EXT (6 years) (cross-over group). No patients discontinued treatment and there were no missed doses. All women received daily calcium and vitamin D.

A subset of these women (n = 115) participated in a 1/3 radius DXA sub-study and were evaluated at baseline, FREEDOM trial (years 1—3), and EXT (years 1–3 and 5). Analysis of mean percentage changes in BMD over time from FREEDOM trial and EXT baselines consisted of a repeated measures model. Wrist fracture rates (per 100 subject-years), rate ratios and 95% confidence intervals (CI) were computed through EXT Year 6.

During the FREEDOM placebo period, the wrist fracture rate was 1.02 (95% CI = 0.80—1.29) per 100 subject-years. In the first 3 years of the EXT, during which time the BMD lost on placebo recovered in response to denosumab and returned to original baseline levels, the subjects’ wrist fracture rate remained comparable to that observed during their FREEDOM placebo period.

With denosumab administration over the subsequent 2 years resulting in BMD increases above the original FREEDOM baseline, the number of wrist fractures was markedly reduced and the wrist fracture rate declined to levels significantly lower than the FREEDOM placebo rate (rate ratio = 0.57, 95% CI = 0.34—0.95; P = 0.03). Further, the number of wrist fractures remained low through EXT Year 6 and the wrist fracture rate continued to remain consistently lower than the placebo rate observed during FREEDOM (rate ratio = 0.61, 95% CI = 0.39–0.94; P = 0.025 compared with FREEDOM).

The speaker mentioned that, for the subset of women with 1/3 radius BMD, the results were best for a subgroup with lower femoral neck bone density. For the newer data (Years 4 — 6), a major decrease in the risk of wrist fracture was seen.

Bilezikian acknowledged limitations in the study in that it was an open-label, single-arm trial using post hoc analysis of the data.

The speaker was asked about the mechanism of action. Bilezikian said he couldn’t answer that specifically but a secondary effect in clinical trials was a two-fold increase in PTH at a dose of 60 mg denosumab. If PTH levels are linked to bone density this shouldn’t have occurred and another mechanism has to be hypothesized.

Another questioner asked what happened to cortical bone when treatment is stopped. Bilezikian said he didn’t know. The number of subjects was too small to evaluate this.