Female smokers were the most susceptible to emphysema in a study of male and female smokers and non smokers from Johns Hopkins. 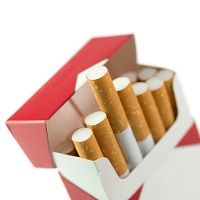 Smokers, but especially females, may be more susceptible to emphysema because of a gene mutation, according to research published in the Journal of Clinical Investigation.

Researchers from Johns Hopkins Kimmel Cancer Center studied 292 smokers in order to test whether telomerase mutations are a risk factor for human emphysema by examining their frequency in smokers with chronic obstructive pulmonary disease (COPD). Of the study group, 3 participants were identified to have the telomerase reverse transcriptase (TERT) gene mutation, which produces the telomerase enzyme. The gene, when functioning properly, repairs the ends of chromosomes from degradation during cell division. These telomeres genes shorten with age and act as timekeepers in cells. But, as the researchers learned, TERT gene mutations lead to shortened telomeres.

The researchers then examined 50 Johns Hopkins patients who displayed symptoms of telomere shortening. Of the 39 nonsmokers in that group, there were no cases of emphysema. There were 11 patients who were nonsmokers, including 6 females — all 6 females and one other patient all had emphysema. The researchers believe this suggests that female smokers with telomerase related mutations might be more susceptible to emphysema.

The results of this study “may now give us an explanation for why people with emphysema have these systemic problems,” explained study leader Mary Armanios, MD, in a press release. “If we know that they have a telomerase mutation, it may help us take care of them in a more sophisticated way and delay the onset of those diseases.”

Prior research from the investigators showed the impact of telomerase in mice models was a risk factor for emphysema after being exposed to cigarette smoke. The link between telomerase mutations and severe hereditary lung disease was also demonstrated.

However, Armanios noted that other studies have shown that age is also a factor in which women smokers may be even more precisely susceptible to emphysema.

“Not everyone who smokes gets emphysema, so our study is part of a bigger effort to find out why some people get it and others do not,” she said.

The researchers also commented on family history of lung diseases, and noted that they weren’t required criteria for emphysema.

“Although a family history of pulmonary fibrosis was not detailed in the COPD cohorts we studied, in the families we fully characterized, emphysema showed autosomal dominant inheritance with pulmonary fibrosis and other telomere phenotypes,” the authors wrote. “The familial clustering of emphysema with fibrosis suggests that these two lung phenotypes, heretofore considered distinct pathologies, may in some cases represent a continuum of degenerative lung disease that shares telomere dysfunction as a genetic susceptibility.”