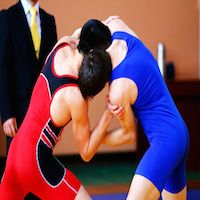 Their football player peers come in a distant second, according to researchers at the University of Colorado Anschutz Medical Campus.

Robert Dellavalle, MD, associate professor of dermatology, University of Colorado School of Medicine, and colleagues, analyzed data from a national sample of US high schools during a 5-year period.

Examining data of 22 high school sports, they found 474 skin infections were reported during 20,858,781 ‘athlete exposures’ (AE), or one athlete participating in one practice, competition, or performance.

The researchers noted approximately 60.6% of skin infections was bacterial and 28.4% was tinea (ringworm). Also, herpetic lesions including cold sores and fever blisters encompassed 5.2% of infections with the remaining 3.2% being an assortment of infections.

Kurt Ashak, fourth year medical student at Michigan State University, remarked in a newsletter, “While most skin infections require a week recovery on average, others may have more serious eye ad neurological involvement from a primary Herpes Simplex Virus.”

While all high school athletic departments are cautious about regularly wiping down wrestling mats before an after matches, most infections erupt on faces and necks, so officials should increase routine cleaning of headgear.

Additionally, the National Federation of State High School Athletic Association recommends referees to perform stringent skin checks prior to each wrestling match to help prevent the athletes from spreading infections.