The distance a COPD patient can walk is a measure of future health. Rehabilitation that increases walking by 600 steps is a sign of success. 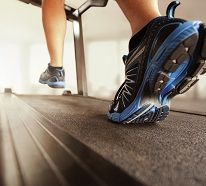 When patients withe chronic obstructive pulmonary disease are successfully rehabilitated a common measurement of improved health is how much farther they can comfortably walk.

A Belgian team set out to set a benchmark for significant improvement, an actual number of increased steps that showed patients' breathing had improved enough so that they were less likely to be hospitalized later.

The research was conducted by Heleen Demeyer, PT, MSc, of the KU Leuven-University of Leuven, Department of Rehabilitation Sciences in Leuven, Belgium, and was published in PLOSOne on April 28, 2016.

Physical inactivity (PA) is a widely recognized risk factor for worsening COPD, and pulmonary rehabilitation has been shown to make it possible for COPD patients to be physically active for an additional five minutes a day.

However, the researchers say, “The interpretation of the increase seen after pulmonary rehabilitation remains difficult as the minimal important difference (MID) has not yet been established.”

The patients were divided into a rehabilitation sample and a test-retest sample.

“In the rehabilitation sample PA was measured for one week before and one week immediately after three months of rehabilitation,” said the researchers.

For the test-retest sample PA was measured during two consecutive weeks. In both groups, lung function was considered, and in the rehabilitation sample, two 6-minute walking tests and the Chronic Respiratory Disease Questionnaire (CRDQ) were included. Both groups wore activity monitors to measure steps taken.

The researchers found that “patients in the rehabilitation cohort significantly increased their PA level with 805+/- 2144 steps,” they report. CRDQ scores showed significant improvement in functional exercise capacity as well. Additionally, they say, “Time to first COPD admission in two years following the rehabilitation was shorter for patients not exceeding the MID.”

“Our data would support that interventions yielding an increase of 600-1100 steps yield clinically important benefits to patients with COPD,” say the researchers, although they also caution that additional research is needed to confirm their results.

They conclude, “The clinical importance of this change is supported by a reduced risk for hospital admission in those patients with more than 600 steps improvement after pulmonary rehabilitation.”