The US Supreme Court has said residents of all 50 states are entitled to subsidies, regardless of whether they bought insurance through a federally run or state-run marketplace. The case centered on whether 2010's Affordable Care Act authorized subsidies to consumers who bought health insurance on non-state-run insurance marketplaces. 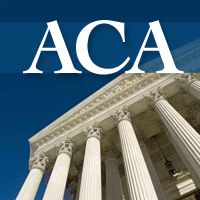 Millions of Americans can keep their health insurance subsidies, regardless of whether they purchased their coverage on a state-run or federally-run marketplace, the Supreme Court ruled Thursday.

In a major victory for President Barack Obama, the court rejected a claim that the law only enacted subsidies for people in states that ran their own exchanges. The vote was 6-3. Had the subsidies been struck down, 6.4 million people in 34 states would have faced the prospect of losing their subsidies, and potentially not being able to afford health insurance.

"Those credits are necessary for the Federal Exchanges to function like their State Exchange counterparts, and to avoid the type of calamitous result that Congress plainly meant to avoid," said Chief Justice John Roberts, in the majority opinion.

The case, King vs. Burwell, largely came down to 4 words: “Established by the state.”

The Affordable Care Act created subsidies for people who met income qualifications and enrolled in insurance “through an exchange established by the state.” The Internal Revenue Service interpreted that to mean residents were eligible in all 50 states, regardless of whether their state of residence set up its own exchange, partnered with the federal government, or simply used the federal exchange.

Plaintiff David King, a Virginia limousine driver, sued the Department of Health and Human Services and HHS Secretary Sylvia Burwell, arguing the IRS is misinterpreting the law. Virginia uses the federal marketplace to offer insurance to its residents. Though he reportedly qualifies for a subsidy, King argued that the extension of subsidies to his state and the 33 other states that don’t run their own exchanges is outside of the law and therefore ought to be struck down.

The ruling has major implications for the 34 states that use the federal marketplace or a hybrid model and the roughly 6.4 million residents in those states who signed up for healthcare on a marketplace.

In the weeks leading up to the decision, medical groups warned that the elimination of the subsidies could have seismic consequences.

In a brief filed in support of the government, the American Hospital Association said repealing the tax credit in the 34 states would be a “disaster.”

“The ranks of the uninsured will swell again, with all that portends in the way of untreated illness and overwhelming debt,” the association wrote.

Burwell and HHS said the intent of Congress was clear and any lack of clarity created by the clause in question is merely a drafting error. In a response to the lawsuit, HHS attorneys said the potential for a collapse of the ACA without the subsidies is proof that Congress didn’t intend for the subsidy to only apply to certain states.

“Petitioners and their amici do not deny the disastrous consequences their reading would entail. To the contrary, that is what they seek.” attorneys for the government wrote. “…No sound approach to statutory interpretation would attribute to Congress the intent to create such a self-annihilating scheme.”

Supporters also note that the word “state” has multiple meanings. It can mean 1 of the 50 US states, but can also refer to a nation as a whole.

However, in their filings, the plaintiffs say the government is making a plain-text issue unnecessarily complex.

“Any English speaker reading those provisions would immediately understand that if a state ‘fail[s] to establish [an] Exchange’ and taxpayers instead enroll through an Exchange established by HHS…, no subsidies are authorized,” wrote the plaintiff’s attorneys.

In a memo on the Heritage Foundation’s website, legal fellows Andrew Kloster and Alden F. Abbott wrote that Congress might have intentionally limited the subsidies to states that run their own exchanges.

"[T]he unavailability of subsidies on the federal exchange puts strong pressure on state governments to set up their own exchanges,” they wrote.

However, in its ruling, the majority disagreed with that idea. They said the fairest reading of Congress' intent supported nationwide access to subsidies.

"Congress passed the Affordable Care Act to improve health insurance markets, not to destroy them. If at all possible, we must interpret the Act in a way that is consistent with the former, and avoids the latter," Roberts wrote. "Section 36B can fairly be read consistent with what we see as Congress’s plan, and that is the reading we adopt."

Scalia, who authored the dissenting opinion, said the ruling represented an extra-constutional action by the court.

"First of all, what makes the Court so sure that Congress 'meant' tax credits to be available everywhere?," Scalia wrote. "Our only evidence of what Congress meant comes from the terms of the law, and those terms show beyond all question that tax credits are available only on state Exchanges. More importantly, the Court forgets that ours is a government of laws and not of men."

King vs. Burwell was the second major Supreme Court challenge to the Affordable Care Act. In a 2012 ruling, the court upheld the law’s individual insurance mandate, but ruled that the federal government could not force states to expand Medicaid by threatening to cut off all Medicaid funding.

This is a breaking news story. Check back for further updates.