With a rallying cry of "Hands off Our Legs" protestors are due to picket the US Department of Health and Human Services over a proposed Medicare rule change that would affect amputees. 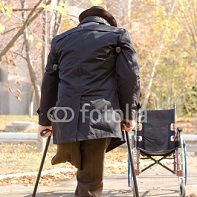 Protestors of a proposed Medicare change that would affect amputees are due to picket in from the federal Department of Health and Human Services building in Washington, DC Wednesday morning.

Proposed changes to Medicare’s reimbursement for lower limb prosthetic care would create new hurdles to amputees, according to a coalition of groups that advocate for people who need prosthetic limbs.

In a joint statement, the Amputee Coalition and the American Orthotic Prosthetic Association said the protest is timed to a public hearing to be held in Maryland at 8 am at which testimony on the proposed change will be heard.

According to the advocates, the Medicare rule change would mean tougher standards for patients who want to get prosthetics. The coalition offered its summary of concerns in statements intended for these patients:

“Among the key concerns about the proposed Medicare policy restricting care for amputees are the following,” the group wrote.

If you are an amputee using - or who has used in the past -- an assistive device such as a cane, crutch or walker, you will be limited to less functional prosthetic devices - even if you only use the assistive device briefly or for limited purposes, such as getting out of bed at night to go to the bathroom.

You could be provided a less functional prosthesis or denied a device altogether just because you may not be able to attain the "appearance of a natural gait." However, as this first of two videos shows, it is not uncommon for individuals in the initial post-operative and rehab periods to have great difficulty. As this second video shows, the same individual may improve far beyond how he or she is assessed initially. However, no such improvement would be possible if a prosthetic device is denied by Medicare based on an unduly negative front-end assessment. In other cases, patients who never achieve a truly "natural gait" can and do rely up prosthetics to live a full life.

If your medical record references certain health issues, including such common conditions as high blood pressure and asthma, Medicare could deny you access to the best available care. With no sound scientific basis, this arbitrary provision would unfairly and needlessly knock hundreds of thousands of amputees out of consideration for the most appropriate prosthetic device for their needs.

The Medicare proposal redefines the rehabilitation process for amputees and forces new amputees to undergo rehab using out-of-date technology that they will not even use once they receive their permanent prosthetic device. This means that the rehab for amputees will be of less value than if it was carried out with the most appropriate prosthetic device for their needs, as is common practice today.

The current Medicare policy for reimbursements is available online at

http://www.medicarenhic.com/viewdoc.aspx?id=2948. The draft Medicare policy may be read at