Most Newborn Brain Injuries Are Not Medical Mishaps

Despite what trial lawyers often allege, most cases of brain-injured newborns is not due to mismanaged deliveries, Chicago study finds. 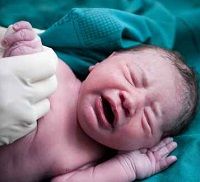 When babies are born with severe brain injury, lawsuits often follow. But a study by Loyola University Medical Center and Loyola University Chicago found that such injuries typically are not the result of mismanaged delivery.

Writing in the Journal of Perinatology, lead author Jonathan Muraskas, MD and colleagues looked at the medical records of 32 full-term infants who developed severe cerebral palsy and mental retardation.

In most of the cases, the damage turned out to have been caused by either chorioamnionitis or fetal anemia.

The team found the medical records show the injuries ha ppened after birth and despite receiving proper resuscitation.

"All too often in cases of professional liability, the focus is on the last two hours of a normal 7,000 hour term pregnancy," he wrote, "This study would support closer scrutiny of the firs two hours [following birth] as a possible [cause] for n on-preventable adverse neurological outcomes in newborns."

Such injuries occur in about one of every thousand births, but just between 8 % and 14.5% of cases of such damage are related to oxygen deprivation.

In 35 such cases the team examined, 18 newborns had chorioamionitis and 14 had severe anemia.

Medical records in the study showed that the blood-gas levels in babies' umbilical cord blood were normal and there was little injury to their brains' deep gray matter. "These and other indicators strongly suggest that the babies had not suffered brain damage before birth," the researchers said.

After birth the effects of their infections caused the damage, injuries that could not have been averted by even the best resuscitation efforts. The injuries were non-preventable, the researchers said.