In the wake of the holiday season, folks are enduring their busy work weeks complaining about having eaten too much or suffering from indigestion. 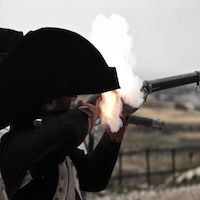 In the wake of the holiday season, folks are enduring their busy work weeks complaining about having eaten too much or suffering from indigestion.

Combatting the two discomforts with antacids, Pepto-Bismol, and other household stomach pain-relief favorites, people aren’t well versed in the origins of our modern understanding of the workings of the digestive system.

The father of modern gastric physiology or gastroenterology, Dr. William Beaumont, a surgeon in the US Army, attained his moniker through strange and possibly ethically questionable means.

Dating back to 1822, Beaumont was asked to oversee the accidentally fired musket wound of 20-year-old fur trapper Alexis St. Martin. While typical patients would immediately die from infection or blood loss, St. Martin pulled through.

Beaumont capitalized on this development and began studying the basics of digestion by tying small pieces of food to a string and dipping them into the hole in St. Martin’s thorax.

Eleven years later, Beaumont published the inaugural research on digestive physiology, “Experiments and Observations on the Gastric Juice and the Physiology of Digestion.”

Read more about the tale of Dr. Beaumont, the “accidental father of gastroenterology” — and perhaps he’ll be remembered next time patients are attempting to soothe their stomach symptoms.