Under the threat of lawsuits, seven major commercial insurers doing business in New York will now cover direct acting antivirals for patients with HCV infection, as will NY's Medicaid program. The plans will also stop denying coverage to patients who abuse drugs or alcohol. 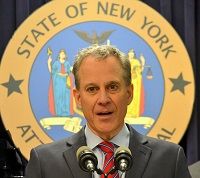 New York State has used a threat of legal action to reach an agreement with seven major insurers to cover the cost of prescribing direct-acting antivirals (DAAs) for commercially insured patients before these patients show signs of advanced liver disease.

The new pact could spur other states to take similar actions, though the matter would be handled state by state.

New York’s Medicaid program will adopt the same policy as the insurers, making the drugs available to the 40% of the state's estimated 60,000 Medicaid patients who have chronic HCV but who are not at the later stages of the illness.

In both cases insurers will also no longer deny coverage for people with HCV who are abusing alcohol or drugs, nor will the insurers require that prescriptions come from specialist physicians.

The announcement regarding the agreement with commercial insurers was made by NY Attorney General Eric Schneiderman (photo).

His office announced on April 21 that it was suing an insurer for refusing to pay for DAAs until patients were seriously ill. That insurer, Capital District Physician’s Health Plan, is not part of the settlement.

“New Yorkers diagnosed with hepatitis C deserve to be treated, and these agreements will vastly improve access to the medications needed to cure their disease,” he said in a statement announcing the pact.

Similar suits have been filed in a few other states.

Schneiderman requested documents from a total of 16 insurers doing business in the state asking how they make decisions on hepatitis C coverage, the Washington Post has reported.

According to a news release from the AG’s office, prior to the agreement, five of the seven insurers limited chronic hepatitis C coverage to members with advanced liver scarring or other complications

Within 45 days, each of those insurers will eliminate restrictions requiring members to have advanced disease — such as advanced liver scarring – before their treatment will be considered “medically necessary” and covered by the plan.

Additionally, prior to the agreement, four of the insurers denied coverage of treatment based on the members’ use of alcohol or other drugs, and three of the insurers only permitted specialists to authorize treatment.

These insurers have now agreed to not deny coverage based on members’ alcohol or drug use and to permit appropriately trained providers to authorize treatment.