The percentage of patients with adverse events was comparable in the tiotropium and the placebo treatment groups in pooled data from seven phase 2 and 3 studies in nearly 3,500 adults. 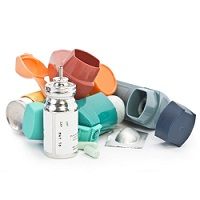 The long-acting anticholinergic bronchodilator tiotropium has been shown effective and safe when added to inhaled corticosteroids (ICS) with or without other maintenance therapies in patients with symptomatic asthma. To compare the safety and tolerability of tiotropium at dosages of 2.5 or 5.0 μg, once daily, delivered by the Respimat device (Boehringer Ingelheim) with those of placebo when each was added to at least ICS maintenance therapy, Ronald Dahl, MD, and colleagues pooled data from seven trials in adults with symptomatic asthma. These phase 2 and 3 randomized, double-blind, parallel-group trials lasted from 12 to 52 weeks. The researchers published the results of their analysis in the September, 2016, issue of Respiratory Medicine.

Adverse events were assessed throughout the treatment period and for 30 days after the last dose of trial medication was given. The study included 3,474 patients, 2,157 of whom were given tiotropium via Respimat.

At each dose level, the percentages of patients with adverse events in the placebo and tiotropium treatment groups were similar:

The most frequent AEs detected included nasopharyngitis as well as asthma and decreased peak expiratory flow rate, which were both less frequent in the tiotropium groups than in the placebo groups. No deaths occurred during any of the trials, and the proportions of patients with serious adverse events were similar across groups at each dose level:

The incidence of cardiac disorder adverse events was low and comparable for the active treatment and placebo groups:

The incidence of dry mouth, which has been commonly associated with the use of anticholinergic agents, was also low and comparable between the tiotropium and placebo groups.

These results led the researchers to conclude that tiotropium given via Respimat was as safe and tolerable as placebo when added to ICS with or without other maintenance therapy in adults with symptomatic asthma.