Pain and itching may be controlled by cells on the spinal cord, according to research published in Neuron. 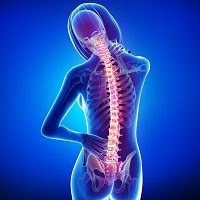 Spinal cord cells are responsible for controlling pain and itch, according to research published in the journal Neuron.

Researchers from the University of Zurich used genetically modified viruses to interfere with the functions of neurons in mice in order to investigate how neurons contribute to pain and itch processing. The researchers drew on prior findings from 50 years ago, which had demonstrated “Gate Control Theory” of pain — the idea that inhibitory nerve cells in the spinal cord could determine whether a pain impulse from the periphery (from the foot, for example) is relayed to the brain or suppressed.

The researchers found that the spinal cord cells, located specifically in the spinal dorsal horn, use the amino acid glycine as an inhibitory messenger. By disabling the neurons, which released glycine, the investigators saw there was an increased sensitivity to pain and signs of spontaneous pain, a press release explained. These pain control cells can be activated pharmacologically through the viruses, which is an important discovery, the researchers continued.

“Evidently, the neurons don’t just control pain, but also various forms of itch,” explained Hanns Ulrich Zeilhofer from the Institute of Pharmacology and Toxicology at the University of Zurich, who added that the nerve cells also controlled and alleviated chronic pain.

The Gate Control Theory was an important building block for this research because the new study demonstrated the ability to influence the activity of pain controlling neurons. The hypothesis that rubbing or holding an injured extremity would alleviate pain was proven correct by the researchers at the University of Zurich. The neurons releasing glycine were inhibited through touching the skin nerves, or non-painful contact.

“These three findings identify for the first the neurons and connections that underlie the Gate Control Theory of pain,” continued Zeilhofer.

In the future, the investigative team wants to examine whether these findings can parlay into treatment therapies.

“The targeted stimulation or inhibition of particular types of neurons in humans is still a long way off and might only be possible in a few decades’ time,” concluded Zeilhofer, who said that another treatment option may lie in receptors that are activated by the inhibitory neurons. “As these receptors are located on the neurons that relay pain signals to the brain, their specific pharmacological activation should also block pain.”