Can a plant extract found in berries help treat hepatitis C virus? Spanish researchers say the flavonoid quercetin is effective in inhibiting an enzyme and interrupting the virus' replication. 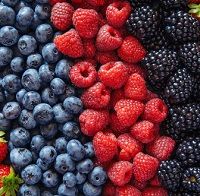 The substance is sold as an herbal supplement and is found in many plans and foods, including red wine, onions, green tea, apples, and berries.

The researchers note that although direct-acting antivirals (DAAs) have improved the sustained viral response (SVR) rates dramatically, “price is still one of the major barriers to achieve hepatitis C eradication mainly in low- and middle-income countries.” Quercetin has been shown to inhibit diacylglycerol acyltransferase (DGAT) activity, which the researchers say is “an enzyme involved in the assembly step of the HCV life cycle.”

Additionally, quercetin “is widely available, cheap, and has been previously demonstrated antiviral activity against HCV,” say the researchers, adding, “The main aims of this study were to further elucidate at which steps of the virus life cycle and by which mechanisms quercetin exerts anti-HCV activity.”

The researchers identified several points in the HCV life cycle at which quercetin had an effect. They say, “it i) inhibits HCV genome replication; ii) affects the morphogenesis of infectious particles, thus decreasing HCV specific infectivity; iii) affects the virion integrity when applied directly onto HCV particles; and iv) hampers the localization of HCV core proteins to LDs [lipid droplets].” Additionally, a phase I clinical trial has demonstrated that high doses of quercetin are well-tolerated.

In addition to finding that quercetin interrupts the life cycle of HCV, the researchers say they found that it “hijacks the host lipid metabolism to fulfill its life cycle from assembly to replication steps,” and that it “pre-empts the subcellular localization of core protein to LDs,” and finally, “is able to decrease HCV infectivity by at least two distinct mechanisms.”

“In conclusion, we showed that quercetin targets both viral and host factors, and hence interferes with HCV infectious cycle at different steps,” say the authors.