A substance used in China as a hangover remedy has demonstrated an ability to prevent alcohol from affecting the brains of rats and may lead to the development of a drug to treat alcoholism.

A substance used in China as a hangover remedy has demonstrated the ability to prevent alcohol from affecting the brains of rats in a new study. Researchers are now planning the first human trial of the substance, dihydromyricetin (DHM), with the hope that it will lead to the development of a drug that can be used to treat alcoholism. The research is described in an article published earlier this week by New Scientist.

DHM is a component of an extract from the oriental raisin tree (Hovenia dulcis) that has been used to treat hangovers in China for hundreds of years. The study, which was led by pharmacologist Jing Liang, MD, PhD, of the University of California, Los Angeles, found that rats injected with a large quantity of alcohol took 70 minutes to right themselves after being placed on their backs without DHM but just five minutes after being supplied with DHM.

The researchers also found that DHM reduced symptoms of anxiety and hangovers. But their most significant discovery may be that rats given DHM tended to avoid alcohol when given a choice between it and sweetened water. Based on this find, the researchers hope that their work on DHM will lead to a successful treatment for alcoholism, which kills 2.5 million people per year, according to the World Health Organization.

"I would give it to problem drinkers who can't resist going to the pub and drinking," Liang told New Scientist. The drug "will reduce the degree of drunkenness for the amount of alcohol drunk and will definitely reduce the hangover symptoms. In time, it will reduce their desire for alcohol."

However, some warn that if a “sobriety pill” were made available, it could potentially backfire. In reference to a compound called Ro15-4513 that was previously explored as a treatment for alcoholism, Markus Heilig, clinical director of the US National Institute on Alcohol Abuse and Alcoholism told New Scientist that "there was a lot of philosophical worry that an 'alcohol antidote' would entice people to consume alcohol and then count on being able to terminate the intoxicating effects on demand.”

The study appears in the January edition of The Journal of Neuroscience. 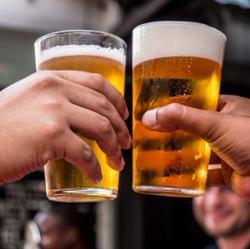