Reports indicate the patient presented with Ebola-like symptoms at a local emergency room and told staff he had recently traveled to Africa. If so, why wasn't CDC protocol followed, and why was the man sent home? 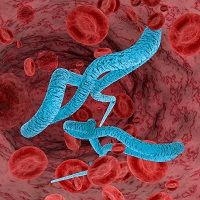 After helping to support efforts to contain the spread of Ebola in Africa and to treat patients infected with the deadly virus, the US Centers for Disease Control and Prevention confirmed the first case of the deadly virus on US soil.

CDC Director Thomas Frieden confirmed during a press conference that a male patient is being treated at Texas Health Presbyterian Hospital after a recent trip to Liberia. Frieden said the man had returned to the country symptom-free and only began experiencing health issues a few days after his return. After initially being examined in the emergency room on Sept. 26, Frieden said the patient was not admitted to the hospital until Sept. 28.

Questions have been raised as to why the man was not flagged as a potential Ebola case, as per CDC guidelines issued in late August, when he first presented to the emergency room with symptoms consistent with Ebola. A CNN report noted that the man also told at least one ER nurse that he had recently traveled to Africa. According to CNN, that information “was not fully communicated to the medical team,” and the man was sent home with antibiotics.

The Texas patient is not the first American to contract the disease but Frieden said unlike the others it does not appear he was involved in the treatment of other patients while in Africa.

“This does reflect the ongoing spread of Ebola in Liberia and West Africa,” he said. “They undoubtedly had close contact with someone who was sick from Ebola or had died from it.”

While there were concerns raised about the risk of the virus being transmitted to other people on the patient’s flight to Texas, Frieden said there were more immediate concerns. “The focus here over the next period needs to be the patient,” he said.

As with all air travelers, Frieden said the patient was given an initial screening before flying back to the United States but as he was not presenting any symptoms at the time there was no reason to suspect he was infected.

“As long as there continues to be cases in West Africa, the reality is that patients travel, individuals travel and as appears to be with this case patients will travel without having any signs of symptoms,” Frieden noted.

It was also noted during the press conference that while other Americans treated for Ebola had been sent to specific facilities, Frieden said he did not believe the Texas patient would be relocated.

“One of the things that we really do want to emphasize is that virtually any hospital in this country that can do isolation is able to do isolation for Ebola,” he said. “We don’t see a need from either a medical or an infection control standpoint to try and move the patient.”

During the press conference Edward Goodman, MD, an epidemiologist where the patient is being treated said the facility was prepared for just such an event.

“We have had a plan in place for some time now in the event of a patient presenting with possible Ebola,” he said.

Goodman added that within the past week a meeting was held with “all of the stakeholders that might be involved in the care of such a patient.”

Much like the assistance being provided in Africa Frieden said the CDC will send a team to Texas that includes epidemiologists, communications experts, hospital infection control, and laboratory workers.

As for the patient himself, Frieden said the CDC would undertake a “3-fold effort” that starts with working toward recovery from Ebola and “provide the most effective care possible as safely as possible to keep to an absolute minimum the ability that anyone would become infected.”

Frieden also said now that the man has been back in the country for more than a week there would be a concerted effort to find people he may have come in contact while showing symptoms of the virus. “Only someone who is sick with Ebola can spread the disease,” he said.

Anyone the man may have come in contact with during that time will be monitored for 21 days to see if they develop a fever, Frieden said, adding that if there are further infections the same process will be followed for those people as well.

“The bottom line here is I have no doubt that we will control this importation or this case of Ebola so that it does not spread widely in this country,” he said.

In a press release issued by the CDC Frieden added, “Ebola can be scary. But there’s all the difference in the world between the US and parts of Africa where Ebola is spreading. The United States has a strong health care system and public health professionals who will make sure this case does not threaten our communities,” he said. “While it is not impossible that there could be additional cases associated with this patient in the coming weeks, I have no doubt that we will contain this.”