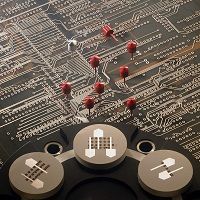 An interactive video game is in development for multiple sclerosis (MS) therapy by researchers at The Ohio State University.

The National Multiple Sclerosis Society gave researchers a $44,000 grant to develop what was originally a rehabilitation program for stroke therapy patients, called “Recovery Rapids.” The game focuses on upper extremity motor impairment, which is a common complication in both MS and stroke patients.

Patients can use the Microsoft Xbox Kinect system in their home, which incorporates a body action sensor. The game recreates constraint induced (CI) movement that is typically only administered in a rehabilitation clinic or physical therapy. During the game, patients can virtually propel and guide a kayak and manipulate their surrounding environments. The game also incorporates a list of questions which are designed to track a patient’s progress, such as using affected limbs to do daily tasks such as drinking or brushing teeth.

“CI therapy has been shown to be a promising motor rehabilitation for MS,” Assistant Professor of Computer Science and Engineering Roger Crawfis, PhD said in a press release, which went on to call the game immersive and interactive. “We hope that our gamified version of it will be a viable in home alternative for people with hand and arm weakness from MS.”

The type of grant awarded to the Ohio researchers are intended to quickly test and develop novel ideas. The annual grants are used to explore previously unexplored, cutting edge innovations and ideas to gather sufficient preliminary data. Then, the researchers apply for long term funding for further data collection.

Prior research has demonstrated that motor decline in progressive MS could be partially reversed; one way to accomplish this may be through the proposed CI therapy gaming intervention. The Ohio investigators plan to use the grant money to conduct controlled setting clinical trials which will assess feasibility and initial efficacy of “Recovery Rapids” for MS patients.

“Rehabilitation options are very limited for the MS population and, for those who do have access to rehabilitation, transportation to a clinic is often challenging and worsens fatigue,” said Lynne Gauthier, PhD, Assistant Professor of Physical Medicine and Rehabilitation. “We are looking forward to working with the MS community to customize the game based intervention and to capture meaningful outcomes.”

When “Recovery Rapids” was introduced for stroke therapy patients, it was touted as novel in home therapy that cost a fraction of normal therapies, which aren’t normally covered by insurers. A center that offered CI therapy may charge as much as $9,000, the Columbus Dispatch reported at the time. For stroke patients, the researchers did not have an estimate of total system cost, but listed a computer, monitor, and motion detection camera ($200) as necessary therapy items.