Rimegepant (rimegepant Zydis), which is a novel therapy for treatment of acute migraines, was found to reduce bothersome suymptoms and eliminate pain in a phase 3 clinical trial. 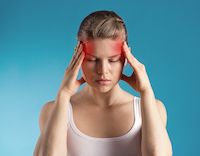 A phase 3 clinical trial for rimegepant (rimegepant Zydis), which is currently awaiting FDA approval for the acute treatment of migraines, has returned positive results. &#8232;&#8232;

"For the first time in nearly three decades, people with migraine not helped by existing medications may have a new option to find relief during attacks," said lead investigator Richard Lipton, MD, professor and vice chair of the Saul R. Korey Department of Neurology at Einstein and director of the Montefiore Headache Center.

Investigators carried out a study that involved 1186 patients that were randomized to receive a 75 mg dose of rimegepant or placebo. All adults included in the study had at least a 1-year history of migraine and 2 to 8 attacks of moderate or severe intensity per month. &#8232;

Primary endpoints for the study were freedom from pain and freedom from the most bothersome symptom — other than pain &mdash; as identified by the patient. Both of these endpoints were assessed 2 hours after patients were administered the dose of rimegepant or placebo.

The final analysis included 537 patients in the rimegepant group and 535 patients in the placebo group. The mean age of the group was 40.6 years and 88.7% of them were female.

In a modified intention-to-treat analysis, investigators found the percentage of patients who were pain free 2 hours after receiving the dose was higher in the rimegepant (19.6%) than in the placebo group (12%). Investigators also noted that patients in the rimegepant group (37.6%) were more likely to report being free from their most bother symptom 2 hours after dose than those in the placebo group (25.2%).

Within the study, investigators noted that gepants may be an effective option for patients whose symptoms do not respond to triptans. Additionally, they called for larger and lengthier trials to determine the consistency of response and the safety of the drug compared to other migraine treatments. &#8232;&#8232;

"These results confirm that rimegepant's mechanism of action--blocking the CGRP pathway--effectively relieves pain and associated symptoms that occur during acute migraine attacks," Lipton explained. "As someone who has studied CGRP blockers for more than a decade, I'm gratified to see their benefits confirmed in a large-scale clinical trial."

This study, titled “Rimegepant, an Oral Calcitonin Gene—Related Peptide Receptor Antagonist, for Migraine,” is published in The New England Journal of Medicine. &#8232;&#8232;

Biohaven Pharmaceutical Holding Company, which used a priority review vouchers to designate their NDA for rimegepant for an expedited review in March, sponsored the current study. A decision on rimegepant is expected in Q2 of 2019. Lipton is a paid consultant and a stockholder of Biohaven.