A sleep apnea device may effectively slow the progression of diabetes in at risk patients. 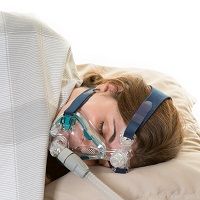 A device used to treat sleep apnea can help pre-diabetes patients improve their blood sugar levels and may slow the progression of diabetes, according to findings presented in the American Journal of Respiratory and Critical Care Medicine.

Researchers from the University of Chicago Medicine observed overweight or obese middle-aged patients’ sleep patterns in order to determine the effect of an eight-hour nightly continuous positive airway pressure (CPAP) treatment on glucose metabolism. The individuals were pre-diabetic and diagnosed with obstructive sleep apnea. The researchers observed 39 participants and randomly assigned them to receive either an eight-hour nightly CPAP (26 patients) or an oral placebo (13 patients).

The investigators analyzed the sleep in a polysomnographically recorded data set which was recorded in the lab each night. CPAP adherence was assured through constant supervision. The patients were instructed to go about their daily routines as normal while they were outside of the laboratory setting. The researchers assessed glucose metabolism at baseline as well as at two weeks of assigned treatment by using oral and intravenous glucose tolerance tests on all patients.

“Our study showed that CPAP in patients with pre-diabetes can lower their risk of progressing to diabetes when CPAP is used for eight hours, a full night’s sleep,” the study’s lead author, Sushmita Pamidi, MD, a former fellow at the University of Chicago who is now on the faculty at McGill University in Montreal, Canada, explained in a press release. “Although eight hours of CPAP per night can be difficult to achieve in real life, our results should provide a strong incentive for anyone with sleep apnea, especially pre-diabetic individuals, to improve adherence to their treatment for cardio metabolic risk reduction.”

“Despite the demonstrated efficacy of lifestyle interventions and the availability of many drug treatments, the economic and public health burden of diabetes remains enormous,” senior author of the study Esra Tasali, MD concluded. “Assessment of sleep apnea should be considered in patients at high risk for diabetes and cardiovascular disease, since our study shows that treatment of sleep apnea can reduce these risks.”