The Fine Line Between Pain Control and Overdose

Although opioids serve as a lifeline for some patients with chronic pain, the medicationâ€™s potentially addictive properties make prescribing a slippery slope. 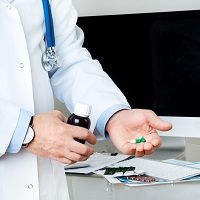 Although opioids serve as a lifeline for some patients with chronic pain, the medication’s potentially addictive properties make prescribing a slippery slope.

A recent study in Medical Care analyzed the relationship between prescription drug dosages and accidental overdoses. It turns out that the threshold for safe prescribing may be lower than what even guidelines recommend, which indicates that the dosage a physician writes could mean the difference between a safe or dangerous outcome.

Researchers from the University of Michigan Medical School examined data from 221 veterans with chronic pain who had passed away as a result of accidental overdose from painkillers. They compared the information to the same number of veterans who were taking opioids for chronic pain but did not overdose at some point from 2002 to 2009. Opioids which were prescribed included: codeine, morphine, oxycodone, hydrocodone, oxymorphone, hydromorphone, fentanyl, meperidine, pentazocine, propoxyphene, and methadone.

Overall, the average prescribed opioid dosage was higher in the overdose cases than in the controls. The veterans who had overdosed were given a prescription higher than 71% of those who didn’t, according to the report.

“This is important because an opioid that is a larger dose per pill, compared to a smaller one, is going to be deadly to a child or adult who hasn’t been taking the medication regularly,” first author Amy Bohnert, MHS, PhD, said in a news release.

However, the data failed to reveal a particular cutoff point that separated safe and overdose. The average morphine-equivalent milligrams (MEM) for the overdose group was 98 and for the control group it was 48. Notably, some patients who overdosed had prescriptions for well under 50 MEM a day. Regardless, the researchers used a model to assess opioid dosage and determined that lowering prescriptions to 100 MEM could help those who are most at risk for an overdose without hurting those who are not.

Limiting unnecessary prescriptions is not only important for the patient, but those around them as well. Large prescriptions can lead to leftover pills that could potentially be taken by children and teenagers in the home.

“As the United States grapples with the rising toll of accidental overdoses due to opioids, our findings suggest that changing clinical practices to avoid escalating doses for patients with chronic pain could make a difference in the number of patients who die,” Bohnert advised.

What to Read Next >>> Chronic Pain Rewires the Immune System