A Medical Marijuana Alternative Without the Tolerance or Withdrawal?

Researchers from Indiana University recently reported on a marijuana-based alternate for managing chemotherapy-induced neuropathy that demonstrated sustained efficacy without the tolerance, physical withdrawal, and side effects seen with traditionally used medical marijuana. 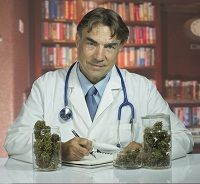 Researchers from Indiana University recently reported on a marijuana-based alternate for managing chemotherapy-induced neuropathy that demonstrated sustained efficacy without the tolerance, physical withdrawal, and side effects seen with traditionally used medical marijuana.

Medical marijuana use has increased dramatically in recent years thanks to the ability of cannabis ingest to treat conditions such as chronic pain. However, the prototypic classic cannabinoid Δ9-tetrahydrocannabinol (Δ9-THC)—the major psychoactive ingredient in cannabis&mdash;is a mixed cannabinoid receptor 1 and 2 (CB1 and CB2) agonist that can produce tolerance, physical withdrawal, and unwanted CB1-mediated central nervous system side effects.

The study investigators, led by Andrea G. Hohmann, PhD, Department of Psychological and Brain Sciences, Gill Center for Biomolecular Science, Indiana University, hypothesized that repeated systemic administration of a CB2-preferring agonist may not engage CB1 receptors or produce CB1-mediated side effects. For a study published in Biological Psychiatry, the research team evaluated anti-allodynic efficacy, possible tolerance, and cannabimimetic side effects of repeated dosing with the CB2-preferring agonist AM1710 in a model of chemotherapy-induced neuropathy produced by paclitaxel using CB1 knockout, CB2 knockout, and wild-type mice, with comparisons made to Δ9-THC. Site and possible mechanism of action of AM1710 were also explored.

However, chronicadministration of AM1710 was found to suppress chemotherapy-induced pain in the mice, without engaging CB1 activity or producing anti-nociceptive tolerance, CB1-mediated cannabinoid withdrawal, motor dysfunction, or hypothermia, unlike with Δ9-THC. Whereas, the therapeutic effects of AM1710 were preserved in CB1 knockout mice, these effects were absent in CB2 knockout mice.

“Our study is important because it demonstrates beyond doubt that activation of cannabinoid CB2 receptors suppresses neuropathic pain without producing signs of physical dependence (ie, a withdrawal syndrome) or other unwanted side effects associated with activation of CB1 receptors in the brain,” said Dr. Hohmann.

As the researchers suspected, mice that were administered Δ9-THC developed complete tolerance to the pain-suppressing effects of THC. With chronic administration, THC was no longer able to effectively suppress neuropathic pain. What’s more, mice treated with Δ9-THC showed a prominent withdrawal syndrome when challenged with an agent that blocks CB1 receptors, indicating signs of physical dependence following THC removal. No such effect was observed with the CB2 agonist. No signs of withdrawal were seen in mice treated chronically with AM1710 when either CB1 or CB2 were blocked.

“We think our data suggests that CB2 receptors are an important target for suppressing chronic pain without unwanted side effects (eg, psychoactivity, addiction),” added Dr. Hohmann.

Commenting on the study, Biological Psychiatry editor John H. Krystal, MD, said, “It is important to know whether the benefits of cannabis ingestion for pain could be attributed in large part to the stimulation of CB2 receptors. CB2 agonists, in theory, would present less risk regarding addiction and intoxication than the ingestion of cannabis or THC.”