A trial of patients undergoing radiofrequency catheter ablation found that 90 days of postoperative antiarrhythmic drugs reduces the short-term â€” but not the long-term â€” rate of recurrent atrial fibrillation. 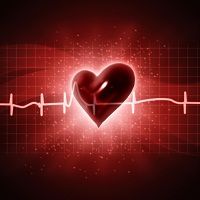 A trial of patients undergoing radiofrequency catheter ablation found that 90 days of postoperative antiarrhythmic drugs reduces the short-term — but not the long-term &mdash; rate of recurrent atrial fibrillation (AFib).

Investigators randomized 1,022 patients to no drugs and 1,016 patients to Vaughan Williams class I or III antiarrhythmic drugs after those patients underwent ablation for paroxysmal, persistent or long-lasting AFib. The primary endpoint was recurrent atrial tachyarrhythmia lasting for more than 30 seconds or tachyarrhythmia requiring repeat ablation, hospital admission, or usage of class I or III antiarrhythmic drugs at 1 year.

“Catheter ablation is increasingly performed as a curative therapy for atrial fibrillation (AF), but the high rate of arrhythmia recurrence is a limitation of the procedure,” the study authors wrote in European Heart Journal. “Although a significant reduction of early arrhythmia recurrence during the treatment period of 90 days was observed [in this trial], it did not lead to improved clinical outcomes at the later phase following discontinuation of the drug.”

The results of the new study are consistent with those from 2 smaller trials. In the first trial, which was published in 2009, 110 patients undergoing catheter ablation for paroxysmal AFib were randomized between no postoperative treatment and 60 days of antiarrhythmic drugs. AFib recurrence was significantly lower among trial group members after 6 weeks but not after 6 months. In the second of the earlier trials, which was published in 2014, 214 patients undergoing ablation for paroxysmal or persistent AFib were randomized between placebo and 8 weeks of postoperative amiodarone. Again, patients in the trial group were less likely to experience recurrent AFib while taking antiarrhythmic medication but no better off after 6 months.

“Unfortunately, however, the consistent results of the previous and present studies strongly suggest that left atria and PVs in patients undergoing catheter ablation for AFib are mostly so degenerated and arrhythmogenic to expect the reverse electrical remodelling within a duration of several months,” the authors of the new study wrote. “Indeed, in the recent report by Zhang et al., a second ablation procedure was more effective in maintaining sinus rhythm than AADs in patients with arrhythmia recurrence after catheter ablation for persistent AFib.”