As the name suggests cardiac rupture can be a very serious condition with potentially fatal results if not treated quickly and effectively. 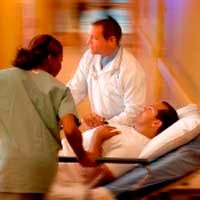 Patients are very likely to die unless physicians identify the rupture early and provide urgent surgical intervention. The incidence of cardiac rupture has decreased over the last 30 years, paralleling increased use of primary percutaneous coronary intervention (PPCI) and improved AMI management approaches. It is now rare.

The journal Cardiology has published a study ahead-of-print that describes the changing nature of cardiac rupture. The primary change in AMI treatment has been the tendency to use PPCI rather than fibrinolytic therapy whenever possible. This has reduced a major risk factor for myocardial rupture.

This study examined 2,380 patients admitted with AMI between 2008 and 2015, and found that 12 had experienced cardiac rupture. None were treated with thrombolytic therapy.

Older patients were at the highest risk with a mean age of 78-years-old. Ten of the 12 patients presented to the emergency department with pericardial effusion. Seven patients underwent coronary

Six patients underwent and survived surgery. The investigators compared the results of this study with their previous work on the subject, and noted this is a significant improvement from results gathered between 2000 and 2003.