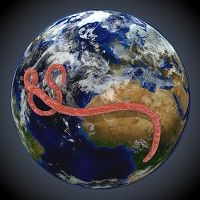 Patients with Ebola virus disease (EVD) who are treated with artesunate-amodiaquine rather than artemether-lumefantrine may have a lower risk of death, according to a recent study. Both drugs are anti-malarial. Etienne Gignoux, MPH, of Doctors Without Borders, and colleagues conducted the study at an Ebola treatment center in Foya, Liberia during August 2014. The results were published in the New England Journal of Medicine on January 7, 2016.

The study came about due to the fact the treatment center ran out of artemether-lumefantrine during a spike in admissions.

“Although this situation was unplanned, it provided the conditions to explore the possible differential effects of these two antimalarial therapies on survival among patients with confirmed EVD,” the authors wrote. The first cases of EVD in the area occurred in March of 2014. By August, “more than 100 new confirmed cases were being admitted each week.”

The standard protocol was for patients to be treated with “a full course of antibiotics and antimalarial drugs,” along with fluid replacement and other supportive treatment as necessary. Then, “on August 19, 2014, the supply of artemether-lumefantrine ran out, and during the subsequent 12-day ‘stock-out’ period, patients who would have normally been prescribed artemether-lumefantrine were prescribed a 3-day course of another artemisinin-based combination, coformulated artesunate-amodiaquine.” The protocol remained the same otherwise.

Between June 5 and October 24, 2014, trained staff at the Ebola center analyzed and investigated patient records and included 381 patients in their study. Patients were divided into four groups: 194 who received artemether lumefantrine; 71 who received artesunate-amodiaquine; 63 who did not receive antimalarial therapy; and a group of 53 for whom data was missing.

Because this experiment was unplanned, the researchers caution “there could be other confounding factors that we were unable to measure and account for in our analyses.”

Some clear limitations included the fact that patient files did not contain information on whether or not the patient completed the full course of treatment, and the treatment was given orally so very sick patients may not have been able to swallow. Many questions remain, and the researchers conclude, “More reserach is needed to independently test this apparent association, and if it is confirmed, to estimate the safest and most effective therapeutic dose against Ebola virus.”