Study results indicate that the increasing rate and severity of obesity in western nations has rendered today's epinephrine autoinjectors an ineffective anaphylaxis treatment for many people. 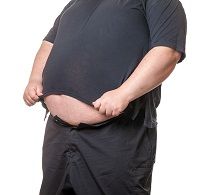 Study results indicate that the increasing rate and severity of obesity in western nations has rendered today’s epinephrine autoinjectors an ineffective anaphylaxis treatment for many people.

The needles inside the devices are not long enough to get all the way through large deposits of fat and penetrate the underlying thigh muscle.

British doctors recruited 28 patients, aged 18 to 75, with existing autoinjector prescriptions and used ultrasound to measure the skin-to-muscle depth at each patient’s anterolateral and anterior thigh.

Skin-to-muscle depth at the recommended anterolateral injection site exceeded the autoinjector needle length of 15.02 mm in 19 of the 28 patients (68%).

Their conclusions echo those of an American study team that recruited 116 subjects,aged 18 to 55, for research that was published in late 2013.

The American researchers also used ultrasound to measure patient skin-to-muscle depth, in this case the depth to the vastuslateralus in a standing position. They performed this test both by touching the skin gently with the device and by pushing hard enough to simulate muscle compression that occurs with correct autoinjector use.

The researchers in that study did not find any significant differences in muscle depth among people of different ages, races or (perhaps surprisingly) overall weights.

The overall takeaway was obvious.

“The current epinephrine autoinjector needle length is inadequate for intramuscular injection, especially among women,” the study authors wrote in The American Journal of Emergency Medicine.

An even earlier study used somewhat different methods to investigate the subject but it, likewise, found existing needles to be inadequate for some patients.

Researchers in that case used images of 50 random men and 50 random women who had undergone computed tomography for other reasons to perform their measurements.

Overall they found that 1 man (who had a BMI of 42.2 kg/m2) and 21 women (including 4 with normal BMIs below 25 kg/m2) had skin-to-muscle measurements that exceeded the 14.3 mm length of the autoinjector they used for reference.

“The distance from skin to muscle for the anterolateral aspect of the thigh is higher in women compared with men,” the authors of the 2005 study wrote in Annals of Allergy, Asthma & Immunology. “This difference suggests that EpiPen may not deliver epinephrine to the intramuscular tissue in many women.”