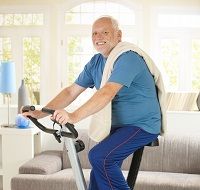 Pain in senior citizens can be decreased through exercise programs, according to findings presented at the American College of Rheumatology/ Association of Rheumatology Health Professionals 2015 annual meeting in San Francisco, CA

Researchers from the Hospital for Special Surgery studied 370 elderly Asian patients with arthritis and musculoskeletal conditions enrolled in an exercise program in order to test the counterintuitive idea that an exercise program could improve their mobility and enhance the overall health of the participants.

“Getting seniors to be active in any way will generally improve their quality of life and help them function better in their everyday activities,” rheumatologist Linda Russell, MD, explained in a press release. “People believe that if you have arthritis you shouldn’t exercise, but appropriate exercises actually help decrease pain.”

The exercise program was held weekly over eight weeks between September 2011 and July 2015 and was lead by bilingual, certified instructors. A total of 204 patients completed surveys prior to and after completing the exercise program.

The patients reported they experienced less pain and were better able to perform daily life activities after participating in the exercise program, the statement continued. Additionally, the patients said their muscle and joint pain was significantly reduced, by about a third.

The researchers also found that a majority of the patients (91 percent) felt the program reduced their levels of fatigue; a significant majority (88 percent) were able to climb several flights of stairs; two thirds were able to lift and carry groceries; and about two thirds could bend, kneel, or stoop.