Diabetes can be a devastating illness. In the United States, it is the leading cause of blindness in individuals between the ages of 20 and 74 years.1 It is also the leading cause of patients undergoing dialysis, with almost 50% of those starting dialysis having kidney failure secondary to diabetic nephropathy.2 Diabetic peripheral neuropathy leading to foot ulcers is the underlying cause of nontraumatic lower extremity amputations in patients with diabetes.3 More than half of lower extremity amputations occur in diabetic individuals,4 although only approximately 7% of the population has recognized diabetes.5 Myocardial infarctions (MIs) are twice as common in diabetic men and 4 to 5 times more common in diabetic women than in nondiabetic individuals.6 Strokes are twice as common7 and peripheral arterial disease is 2.5 times more common8 in patients with diabetes compared with disease-free subjects. Approximately 90% of diabetic patients have type 2 diabetes and two thirds die from MIs and strokes.5

Although these numbers are startling, these complications are avoidable. The microvascular complications of diabetes could be markedly reduced, if not eliminated, if near euglycemia could be maintained. Progression of early kidney disease to late-stage nephropathy can be forestalled by appropriate (nonglycemic) therapy. Although macrovascular disease is not entirely preventable, its effects could be sharply curtailed with appropriate lipid and blood pressure management, smoking cessation, and aspirin therapy. The American Diabetes Association (ADA) has promulgated standards of care regarding glycated hemoglobin (HbA1c), low-density lipoprotein (LDL) cholesterol, and blood pressure (Table); if these objectives were met, the complications caused by diabetes would be greatly attenuated.9 Currently, only 2% to 10% of diabetic patients meet all 3 of the ADA’s HbA1c, LDL cholesterol, and blood pressure goals.10-13 The first of this 2-part series will focus on HbA1c and lipid goals (click here and scroll to pages 14 and 15 for at-a-glance glycemia and dyslipidemia protocols).

There have been 5 studies in over 2000 type 114-16 and type 217,18 diabetic patients that showed virtually no development or progression of retinopathy and nephropathy over 4 to 9 years if mean HbA1c levels of less than 7.0% were maintained. Figure 1 shows this relationship in type 1 diabetic patients enrolled in DCCT (Diabetes Control and Complications Trial). In 2 studies,14,17 interventions that lowered glycemia resulted in considerably fewer microvascular complications, proving a causative relationship between near-euglycemia and improved outcomes.

There is much less evidence that lowering glycemia will have a beneficial effect on macrovascular disease, at least in the near- to mid-term. Although there is an association between glycemia and cardiovascular disease (CVD), this relationship extends into the mid-normal range.19 For instance, in men between the ages of 40 and 74 years, there was an approximately 2.5-fold increased risk of an MI in those with HbA1c levels between 5.0% and 5.4% compared with those who had HbA1c levels lower than 5.0% over 4 years.20 In another study involving nondiabetic adults, there was an approximately 2-fold increased risk of CVD events in individuals with HbA1c levels in the upper quintile (>5.2%) compared with those in the lowest quintile (<4.6%).21 In earlier studies22 and in a meta-analysis of these studies,23 no benefit on CVD was seen by lowering glycemia in patients with type 2 diabetes.

Three larger recent studies also failed to find a beneficial effect with glucose control on CVD events. In the ACCORD (Action to Control Cardiovascular Risk in Diabetes) study, 10,251 patients (median baseline HbA1c level of 8.1%), 35% of whom have had a previous CVD event, were randomized to receive intensive (goal HbA1c level <6.0%) or usual care (goal HbA1c level of 7.0%-7.9%).24 The study was stopped after 3.5 years because of a significantly higher mortality rate in the intensively treated group compared with the control group, with achieved median HbA1c levels of 6.4% and 7.5%, respectively.

In the ADVANCE (Action in Diabetes and Vascular Disease: Preterax and Diamicron Modified Release Controlled Evaluation) study, 11,140 patients (mean HbA1c level of 7.5%) with a history of major macrovascular or microvascular disease or at least 1 other risk factor (besides diabetes) for vascular disease were randomized to receive intensive glucose control (goal HbA1c ≤6.5%) or standard glucose control (targeted HbA1c according to local guidelines).25 At the end of the study, which had a median duration of 5 years, there was no difference in major macrovascular events, including nonfatal MI, nonfatal stroke, and death from CVD, between the intensively treated patients (achieved mean HbA1c of 6.5%) and those treated using standard protocols (achieved mean HbA1c of 7.3%). There was a significant reduction in the development of nephropathy in the intensively treated group, which has also been found in numerous other studies examining microvascular complications.

In the VADT (Veterans Affairs Diabetes Trial),26 1791 veterans with a mean baseline HbA1c of 9.4% were randomized to receive intensive or standard treatment. Of these patients, 40% had a prior CVD event. At the end of the study, which had a median duration of 5.6 years, there was no difference in major CVD events, including death, MI, stroke, heart failure, amputation secondary to ischemia, and intervention for coronary or peripheral arterial disease in the intensive treatment (achieved HbA1c of 6.9%) and standard treatment (achieved HbA1c of 8.4%) groups. As in the ADVANCE study, there was a significant decrease in the progression of albumin excretion in the intensively treated group.

Recent evidence suggests, however, that lowering glycemia may have a long-term benefit on both microvascular and macrovascular disease. In the UKPDS (United Kingdom Prospective Diabetes Study),27 5102 patients with newly diagnosed type 2 diabetes were randomized to receive either intensive glucose control (n = 2729) with sulfonylureas or insulin or to standard glucose control (n = 1138), initially with diet. Baseline HbA1c levels were 7.1% in both groups and remained 7.0% in the intensive group, but increased to 7.9% in the standard group when the study ended after a median of 10 years. During the active-treatment phase of UKPDS, there were significant reductions in diabetes-related end points and microvascular disease in the intensively treated group. There was also a 16% reduction in MI in the intensively treated group, which just missed statistical significance (P <.052). After the trial ended, patients were followed clinically for 5 years and by questionnaires for an additional 5 years. Between group differences in HbA1c levels were lost within the first years after the study ended and were approximately 7.8% at the last measurement 5 years later.28 By 10 years, the significant differences in any diabetes-related end point and microvascular disease persisted, and since more CVD events occurred over time, the 15% reduction in MIs and the 13% reduction in death from any cause became statistically significant in patients originally assigned to intensive treatment versus standard treatment. This is termed a legacy effect and is consistent with long-term results of DCCT.

In DCCT, 1441 type 1 diabetic patients (baseline HbA1c level of 9.1%) were randomized to receive either intensive or standard treatment and followed for a mean of 6.5 years.29 At the end of the study, there was a 1.7% difference in HbA1c levels between the intensive-treatment and standard-treatment groups, with levels of 7.4% versus 9.1%, respectively. The patients were then followed for a mean of 17 more years.30 As in the UKPDS, between group differences were quickly lost, with the original intensive- and standard-treatment groups maintaining mean HbA1c levels of 7.9% and 7.8%, respectively. Although there was no difference in macrovascular disease (CVD is unusual in young type 1 diabetic patients) during the intervention study, there was a 57% reduction in the first occurrence of nonfatal MI, stroke, or CVD death at the end of the observational follow-up period.30 There was also a legacy effect on the subsequent progression of retinopathy and nephropathy in the intensively treated group.31,32 Those who progressed had significantly more accumulation of advanced glycated end products than those who did not progress.32 These compounds, which last in tissues for many years and have been implicated in causing both the microvascular and macrovascular complications of diabetes, may account for the legacy effect of earlier good control.

Relative risk reduction is similar across all baseline LDL cholesterol levels, equally beneficial in older and younger diabetic patients, and in men and women.35,36 There is an approximately 20% relative risk reduction for a 40-mg/dL decrease in LDL cholesterol levels.33,37 Based on these findings, it is not surprising that cardiac events were 25% lower in diabetic patients receiving 80 mg of atorvastatin compared with 10 mg.38 Treatment of approximately 30 type 2 diabetic patients with a statin will prevent 1 major cardiac event over 4 years.39,40 Routine monitoring of liver function tests and creatinine and creatine phosphokinase (CPK) levels are unnecessary, except in specific circumstances (eg, if patients have pertinent symptoms, baseline abnormalities of liver function tests, a myopathy already present at baseline, or are taking drugs that interact with statins and increase the risk for adverse events).41 The use of statins has been shown to be cost-effective.42,43

Based on these data, the ADA9 recommends that all type 2 diabetic patients over the age of 40 years should receive a statin regardless of their baseline LDL cholesterol levels (see dyslipidemia protocol on page 15). The goal for patients without clinical evidence of CVD is less than 100 mg/dL. For those with clinical evidence of CVD, the goal is to lower levels to below 70 mg/dL. Only 60% of type 2 diabetic patients with CVD and 45% of those without CVD currently meet the LDL cholesterol goal of less than 100 mg/dL.44

What about triglyceride concentrations? Very high triglyceride levels (>1000 mg/dL) can cause pancreatitis. Patients presenting with values above 1000 mg/dL, therefore, should initially be treated with a fibrate. Because all diabetic patients over 40 years of age will also be taking a statin, the fibrate should be a fenofibrate, not gemfibrozil. The combination of a fibrate and a statin increases the risk of side effects; however, a fenofibrate is less likely to result in side effects because it does not affect the pharmacokinetics of statins, unlike gemfibrozil.

Diabetes can be a debilitating illness, especially when near-euglycemia is not achieved and other CVD risk factors remain uncontrolled, including lipid levels. The ADA has issued guidelines to enable physicians to optimize the care of patients with diabetes. Part 2 of this series will examine the ADA’s stance on blood pressure management, smoking cessation, aspirin therapy, as well as important components of the physical examinations, including eye and foot examinations. 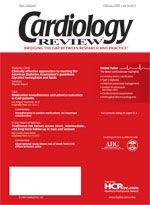