This groundbreaking study aims to create a national resource to guide neurologists in selecting medications that are more effective and cause fewer, if any, side effects than currently available options.

This groundbreaking study aims to create a national resource to guide neurologists in selecting medications that are more effective and cause fewer, if any, side effects than currently available options. The hope is to also make the resource available to researchers who will apply new analytical methods in the future that are impractical or unimagined today.

The Epilepsy Phenome/Genome Project (EPGP;) is a five-year study that represents a unique attempt to capitalize on the recent advances in high-throughput genomic techniques and the wealth of information accumulated through detailed phenotypic instruments to improve epilepsy care. To identify new genes that contribute to epilepsy and pharmacoresponsiveness, researchers will characterize the clinical, electrophysiological, and neuroimaging phenotypes of thousands of participants with discrete subtypes of idiopathic-generalized, focal, or severe earlyonset pharmacoresistant epilepsy. Wholegenome association, linkage, and copy number polymorphism (CNP) analysis will identify candidate genes that contribute to an increased risk of epilepsy and are likely to contribute to the control of membrane and network excitability, development of the nervous system, or the efficacy of AEDs. EPGP will establish a national resource that will be made available to other researchers who will apply new analytical methods in the future. The project is a collaboration of the National Institute of Neurological Disorders and Stroke (NINDS) and more than 100 researchers, clinicians, coordinators, and informatics experts at epilepsy centers across the US.

Orrin Devinsky, MD, professor of neurology at the NYU School of Medicine, views EPGP as “an unparalleled opportunity to make discoveries that will translate into improvements in epilepsy care. It could allow us to match drug safety and effectiveness to a specific person, focus research on new therapeutic targets, and crack the code on the causes of common forms of epilepsy.” He adds, “We especially need siblings with epilepsy in order to answer these questions.”

Although heredity has been known to cause epilepsy, the progress in identifying the genetic basis of epilepsy has been limited primarily to the discovery of single gene mutations that cause epilepsy in relatively rare families. For the more common types of epilepsy, heredity plays a much more subtle role, and it is thought that a combination of mutations in multiple genes is likely to determine an individual’s susceptibility to seizures, as well as his or her responsiveness to antiepileptic medications.

Complex multigenic factors appear to play an important role in the development of idiopathic generalized epilepsy (IGE) and nonsymptomatic localization-related epilepsy (LRE), as well as in the pharmacoresponsiveness or pharmacoresistance of such patients to antiepileptic drugs. De novo genomic mutations may cause cryptogenic forms of infantile spasms and Lennox-Gastaut syndrome, and certain malformations of cortical development. Progress in understanding the complex genetic and developmental mechanisms contributing to these forms of epilepsy will require an elaborate analysis of phenotypic and genotypic data from a large number of participants.

Our dream is that, in the not-too-distant future, we will be able to do a gene profile before we ever make a decision about which drug to use on a patient. This information would help healthcare providers choose medications that are more effective and cause fewer, if any, side effects.

Mutations in genes encoding ion channel subunits appear to cause certain forms of generalized epilepsy, which raises the possibility of designing far more specific, targeted treatments for patients with these disorders. Similarly, recent findings indicate that genetic mutations in drug transporters (p-glycoproteins) may explain some aspects of medical intractability, suggesting that pharmacogenetic testing in patients with epilepsy may one day be used to tailor therapy. The potential determinants of intractability in patients with localization-related epilepsy, such as those related to mesial temporal sclerosis (MTS) and focal cortical dysplasia, remain very obscure. The ability to create new, effective therapies for this group of patients is likely to be inextricably linked to the depth of our understanding of the nature of their disorders.

The approach to teasing apart the more complicated genetic factors in epilepsy requires a very large number of patients whose epilepsy has been well characterized. To this end, the EPGP investigators will be enrolling 3,750 people with epilepsy and 3,000 controls over the course of the study. EPGP is enrolling two types of participants with epilepsy:

The first group, termed “sibling pairs,” are full-blooded siblings who both have nonsymptomatic epilepsy (either IGE or LRE). Participants are to be age 60 years or younger, and younger than age 30 years at the onset of seizures. Neither sibling can have a confirmed genetic mutation or known cause of the epilepsy (head injury, stroke, brain tumor, infection, etc).

The second group, termed “triads,” consists of an individual with a cryptogenic form of infantile spasms or Lennox-Gastaut syndrome, along with certain bilateral malformations of cortical development (polymicrogyria or periventricular heterotopias). The eligibility requirements are similar to group one with the exception that both biological parents are also required to participate, and neither should have a history of epilepsy.

Information about the characteristics of a participant’s epilepsy will be collected through Web-based interviews that can be carried out in person or via telephone. De-identified data about seizure types, EEGs, imaging studies, and effects of treatment will be collected and entered locally via an integrated, HIPAA- and FISMA-compliant, Web-based informatics platform, and then sent in encrypted form to a secure EPGP data repository. All participants will be asked to submit a sample of blood that will be deposited in the NINDS Human Genetics DNA and Cell Line Repository. The blood sample can be collected at a designated EPGP clinical center, a local laboratory, or via a commercial service that will come to the person’s home.

Once this first phase of the study is completed, genomic analyses will be used to identify potential connections between patterns of DNA sequences and specific characteristics of epilepsy in the study population.

Now that EPGP has been successfully launched, the next phase of the project is to initiate a national campaign that publicizes the objectives of the study and motivates people with epilepsy and their family members to join the effort. To this end, EPGP depends greatly on neurologists, nurse specialists, and other healthcare professionals throughout the country who care for people with epilepsy and are aware of sibling pairs or triads who might qualify for enrollment in EPGP. If you know anyone who might qualify to participate, please have them contact EPGP to consider being a part of this history-making research project.

Dr. Lowenstein is a professor and vice-chairman in the Department of Neurology at the University of California, San Francisco (UCSF), and a principal investigator on EPGP. 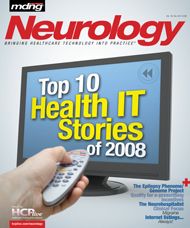 5 Questions… with A Neurohospitalist
Ring in the New Year by Implementing E-prescribing
Making History: The Epilepsy Phenome/Genome Project
One Last Look back: The 10 Biggest Health IT Stories of 2008
Related Videos
Related Content