Margaret Bobonich, DNP, FNP-C, DCNP, FAANP: Welcome to this HCP Live® Peers and Perspectives presentation on expert nurse practitioners and physicians’ assistants exchange on the changing treatment approaches in the management of atopic dermatitis. I’m Margaret Bobonich, assistant professor at Case Western Reserve University School of Medicine and School of Nursing. I am joined today by my esteemed colleague, Douglas DiRuggiero from Rome, Georgia at the Skin and Cancer Cosmetic and Dermatology Center. We’re here today to discuss the management of atopic dermatitis. We’re going to focus on some of the newer mechanisms of action being studied including JAK inhibitors that are currently in the drug pipeline. Douglas, let’s start. I think one of the most important things that is in talking about atopic dermatitis is first and foremost, why is it important? Why is atopic the recognition, the diagnosis, and the treatment, why is it important for any nurse practitioner or physician’s assistant?

Douglas DiRuggiero, DMSc, PA-C: Well, I think it’s important because of its prevalence. This is a disease that affects almost 16 million individuals in the United States alone with another six million affected that are adults, with the majority of them being kids. And so just that alone, just in the dermatology space, we have to close to 10,000 to 11,000 dermatologists in the United States; another 8,000 or 9,000 NPs and PAs who practice dermatology full-time. If you combine that to 20,000 providers within our specialty, that 20,000 going into 16 million, that means that’s about 800,000 individuals with this disease per provider that specializes in dermatology. You can see, I mean that may seem like a small number compared to the overall population of our country, but when you break it down to the number of specialists that can treat it, it shows you how prevalent it is. Secondly, it’s not just prevalent but this is a disease that is chronic, it’s intermittent, it’s relapsing, it’s very pruritic, it’s very life-altering for the child who has it, for the adult. It changes the life of the family. This is a very life-altering disease with a high impact on the cost in health care, high impact on the family of both short-term and long-term.

Margaret Bobonich, DNP, FNP-C, DCNP, FAANP: And I think you're right Doug. One of the most important things is that we’re dermatology but our colleagues are out there. And they’re trying to manage it in maybe two, three months before they can get their patients to us in dermatology. It’s important first of all for them to know, one, atopic dermatitis, how it presents and what the treatment options are because it has changed so significantly this past decade. We’ve seen new therapies that have changed the lives of these patients. And we want our colleagues to know what is going on in atopic dermatitis. I guess first and foremost, you mentioned that this is children and adults. And I think that’s a little different than we’ve thought of in the past.

Douglas DiRuggiero, DMSc, PA-C: It’s different but we don’t want to give you the impression that it’s equally split. We know that this is a disease that primarily diagnosed in childhood. In fact, the studies, they vary but close to 50 to 60 percent of atopic dermatitis is confirmed diagnosis by the age of two. By the time you move up to age five, 70 to 85 percent are diagnosed before the age of five. By the time you go to age 15, 90 percent have presented with atopic dermatitis have been diagnosed by the age of 15. But the key is realizing that particularly in the primary care space that the elderly and adults can present with atopic dermatitis as well. While only about 20 percent of those have never had it before as a child, the majority of them didn’t have it as a child, they can present and it can often get misdiagnosed in that population as just prurigo nodularis, as a contact dermatitis, as an irritant dermatitis, or kind of as the generalized term of this kind of idiopathic pruritic eruption of elderly or eczematous eruption of the elderly. And a lot of that is probably and presenting and phenotype of atopic dermatitis. But by far, this is the clinical diagnosis made in childhood and we could talk about, I mean how do Margaret go about confirming the diagnosis in your mind that this is atopic dermatitis? Are you running tests, are you doing biopsies, or is this largely clinical for you when someone comes in as a referral?

Margaret Bobonich, DNP, FNP-C, DCNP, FAANP: That’s a good question Douglas. You know you and I have been practicing dermatology for a long time. For you and I it’s usually a clinical diagnosis because we are used to really extricating that very important patient history, that it’s relapsing, it’s chronic, it is pruritic. If those aren’t present, then I’m not thinking atopic dermatitis. But to take a step back, I think one of the most important things is really to clarify. I think people mix – clinicians mix these terms, eczema, atopic dermatitis, and dermatitis. And they’re not all the same thing. I think just stepping back and understanding that first of all atopic dermatitis is a clinical diagnosis. It is not the same as eczema, which is basically dry skin that can be pruritic but a lot of people get eczema but that is not the same as atopic dermatitis. And then dermatitis, which means inflammation of the skin can be a catch-all. What we want you to know is that atopic dermatitis is a multi-factorial skin condition and one that warrants a very comprehensive assessment, management, and basically life-long when it goes into adulthood. So that’s a good question Douglas.

Douglas DiRuggiero, DMSc, PA-C: Yeah. I think the way that I think about that Margaret is this condition, which we call atopy – A-T-O-P-Y just how that word is broken down, A being atypical and topy mean topography like a topographical map. It’s an atypical presentation of what you would normally see. And we know now that this is not just a skin barrier dysfunction problem. We had thought originally decades ago that it was just a problem with the skin barrier, that the skin barrier was breaking down, that there may be some genetic problems that are contributing to it, a lot of extrinsic factors that are contributing to it. But the fact is if you just had skin breakdown by itself then that wouldn’t be atopic dermatitis. That would be all the other forms of eczema. So atopic dermatitis is the combination of skin barrier dysfunction with an immune inflammatory response. And you have to have that immune dysregulation at the same time where there’s up regulation of these things we’re going to talk about, cytokines, up regulation of these inflammatory pathways that they were born preprogrammed, these individuals, with this genetic tendency to have this. If you just had that and no skin barrier problems, then you would present with issues like asthma and with other allergic rhinitis and those problems. It’s the skin barrier and the immune dysregulation together. And you can throw in a little bit of microbiome problems with over-colonization of certain organisms or a shift in the balance of that very careful milieu that lives on the skin and in our gut. A shift in that plays a part. Those three things together, microbiome shifts, immune dysregulation, and the epidermal barrier dysfunction, all three together have to come together to call this atopic or atopy dermatitis. And that’s an important thing that I think you alluded to I just wanted to expand upon.

Margaret Bobonich, DNP, FNP-C, DCNP, FAANP: Thank you for watching HCP Live® Peers and Perspectives. If you’ve enjoyed this content please subscribe to our newsletters to receive the upcoming programs and great content right in your inbox. So thank you everyone. Be safe and live well.

Pregnant Women with Psoriasis at Increased Risk of Ectopic Pregnancy 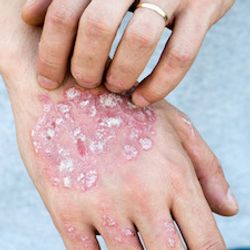