The wireless, customizable NESS H200 Hand Rehabilitation System device has proven to give newfound independence to patients with paralyzed hands caused by a neurological disorder.

The wireless, customizable NESS H200 Hand Rehabilitation System device has proven to give newfound independence to patients with paralyzed hands caused by a neurological disorder. Losing the ability to use one’s hands as a result of neurological disaster such as stroke, traumatic brain injury, or multiple sclerosis can be devastating. It takes away a person’s independence—from being able to dress or cook to the ability to appreciate and participate in hobbies. Historically, many people suff ering from paralyzed hands have had few treatment options and were mostly trained to live with their limitations. Now, with the help of new technologies such as the NESS H200® Hand Rehabilitation System, those suff ering from this condition have the ability to not just “live with” their limitations, but actually regain function in their hands.

The NESS H200 is an FDA 510(k)-cleared system designed to use mild electrical stimulation to improve hand movement and motor recovery in patients who have lost function of their arms and hands following injury to the central nervous system. The wireless device leverages functional electrical stimulation (FES) to evoke change in a person’s motor ability. FES is commonly defi ned as the use of small electrical impulses to stimulate nerves that activate paralyzed muscles and encourage more natural movement, providing patients with new levels of physical independence and productivity that most would have thought impossible. Portable and customized to each patient, the NESS H200 is worn as a non-invasive, hand-wrist splint that enables healthcare professionals to incorporate the benefits of FES therapy into the treatment plan of their neurologically impaired patients. The system enables patients to retrain their paretic limbs and brain to carry out simple tasks that require hand and arm function.

For patients like LaVerne Gier, the NESS H200 can bring back independence. Gier suff ered a right ischemic stroke at age 72, and although her visual-spatial and cognitive skills remained intact, she experienced left hemiparesis and underwent a standard course of in- and outpatient rehabilitation. Four years after the stroke, Gier consulted with Dr. John McGuire, associate professor of physical medicine and rehabilitation at Froedtert Hospital and the Medical College of Wisconsin, and director of the Spasticity Clinic and the Stroke Program. McGuire referred her to occupational therapy for an assessment to determine if she was a NESS H200 candidate.

The initial assessment of her occupational performance revealed that she performed all basic activities of daily living and selected household and community tasks at the modifi ed independent level with the use of a quad cane. She drove and was active in her community. However, she depended solely on her non-aff ected upper extremity for all tasks. She wore a standard pouch sling on her left upper extremity during the day, which positioned it into shoulder adduction and internal rotation, her elbow in fl exion, and the forearm in rotation. Gier also wore a static left hand and wrist splint, positioning the wrist in slight extension and the fi ngers in extension. Assessment of her left upper extremity motor skills indicated active assist range of motion limitations in shoulder elevation to 90 degrees, and fi nger fl exion was limited by four inches from the palm. Gier demonstrated intact left upper extremity sensation and slight hand edema.

The initial OT interventions included the removal of her sling and static hand splint, the use of a neoprene thumb support to position the thumb into abduction, and extension for grasp, educating Gier on how she could incorporate her left upper extremity into all aspects of daily tasks, an aggressive program to stretch the fi ngers into fl exion, left shoulder stretches on a surface into elevation and external rotation, and the use of the NESS H200 for one hour, two to three times a day. With the facilitation provided by the NESS H200, she performed graded and repetitive reach, grasp, pinch, and release tasks.

After four months, Gier demonstrated reduced left upper extremity impairments and improved occupational performance. She no longer used the cane and enrolled in a dance class. She incorporated her left upper extremity into all activities, including sewing and card playing. Her shoulder and hand motion improved to functional and she no longer noted pain in her extremity. Her left hand did not appear edematous, and she was able to reach and close with her left hand to grasp and pinch. Gier continues to use the NESS H200 daily and show all of the above gains.

The NESS H200 may benefi t those who suff er from multiple sclerosis, stroke, traumatic brain injuries, spinal cord injuries, and cerebral palsy. Designed to be used in a rehabilitation setting and at home, the NESS H200 may reduce spasticity, prevent muscle atrophy, reduce pain or muscle spasms, reeducate muscles, and improve hand activity or range of motion. For patients like LaVerne Gier, the NESS H200 can mean no longer having to “live with” limitations, and can defi ne independence. 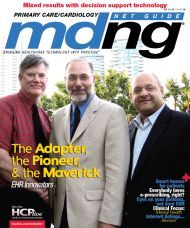