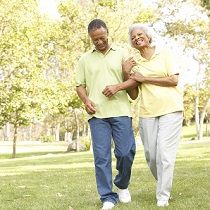 Investigators recruited 41 adults with type II diabetes for a randomized crossover trial. Each of the patients — whose mean age was 60 years (± standard deviation of 9.9 years) and whose mean diabetes duration was 10 years &mdash; spent two weeks undertaking a single 30-minute walk each day and another two weeks taking 10-minute walks immediately after each of the main meals of the day. (A single participant died during the 30-day washout period between interventions, but participation in the study was not judged to contribute to that death.)

Physical activity was measured by accelerometry and blood sugar was measured with continuous glucose monitoring at 5-minute intervals. The primary outcome was blood sugar three hours after each meal, as assessed by the incremental area under the blood glucose curve (iAUC). Post-meal glucose is regarded as an important target in managing type 2 diabetes, given its independent contribution to overall blood sugar control and cardiovascular risk.

Both exercise protocols match current physical activity guidelines that are given to patients with type II diabetes. These guidelines call for 30 minutes of mild-to-moderate exercise divided up however the patient wants. The investigators found, however, that the second protocol was significantly more effective than the first.

The iAUC was more than 10% lower when patients walked immediately after all three meals than when they walked in 30-minute blocks (ratio of geometric means, 0.88; 95% confidence interval [CI], 0.78-0.99). The difference was particularly large after the evening meal, when most patients tended to consume the greatest number of carbohydrates and, under normal circumstances, engage in the most sedentary subsequent behaviors (ratio of geometric means; 95% CI, 0.67-0.91).

“The benefits relating to physical activity following meals suggest that current guidelines should be amended to specify post-meal activity, particularly when meals contain a substantial amount of carbohydrate,” the study authors wrote in Diabetologia,

“Postprandial physical activity may avoid the need for an increased total insulin dose or additional mealtime insulin injections that might otherwise have been prescribed to lower glucose levels after eating,” said Andrew Reynolds, PhD, a University of Otago researcher who is the paper’s lead author. “An increase in insulin dose might, in turn, be associated with weight gain in patients with type 2 diabetes, many of whom are already overweight or obese.”

For example, a 2009 study published by the Journal of the American Medical Directors Association compared the effect of a 20-minute walk taken just before dinner or 15 to 20 minutes after dinner in 12 patients with type II diabetes. Postprandial walking, the study authors found, resulted in significantly lower plasma glucose levels at the end of exercise, roughly 40 minutes after eating.

Other studies have found similar results in patients who exercised after breakfast or lunch rather than exercising before those meals.

Studying the Link Between Exercise and Insulin Sensitivity