Hot Topic: The AMA vs. Sermo

Sermo.com CEO Daniel Palestrant recently proclaimed that the AMA no longer speaks for US physicians, and that now is the time to “turn to entities like Sermo where physicians are establishing a new voice to collectively discuss the future of our profession.”

Sermo.com CEO Daniel Palestrant recently proclaimed that the AMA no longer speaks for US physicians, and that now is the time to “turn to entities like Sermo where physicians are establishing a new voice to collectively discuss the future of our profession.” We posted an article about this on HCPLive.com and also sent out a “Hot Topic” eDigest that asked readers to complete a survey and share their thoughts and opinions on the AMA, Sermo, and whether physicians’ interests and concerns are being adequately represented in the debate over healthcare reform. Several responses from readers are reprinted below.

It is my opinion that the AMA does not effectively represent the interests of surgical specialists whose voices are often overwhelmed by the primary care predominance of the AMA’s membership.

Physicians need someone to represent them and it is not the AMA, which is just another tool being used to manipulate the lives of American doctors. No one ever includes real practicing medical professionals in policy-making; rather they go to the AMA for the “pulse” of the medical community. Sites [like Sermo] that allow physicians to voice their opinions and truly poll their current feelings are relevant and more valid than the AMA. The system has taken away most of our rights and abilities to control our own destinies, and the AMA has been a willing participant from the beginning of the anti-doctor revolution. If Sermo is a viable forum and tool for physicians to fight back, we should and will support it.

The AMA when first established represented the views of the doctors in the “trenches,” but now they have capitulated to our government and are not interested in the needs of practicing physicians. The AMA is only interested in self-advancement and maintaining its position.

The AMA has a 162-year history of open dialogue in a democratically elected House of Delegates representing each state and specialty society. Reference committee sessions take place twice yearly where any member physician, not just delegates, can speak his or her mind about policy. Non-members may also petition to speak, and usually are granted the privilege! There is transparency in revenues and expenditures, including compensation of officers. Consensus creates policy; policy drives action. Sermo has a two-year history of dependency on the AMA. There is nothing democratic about its function; nothing transparent about its operation and financing. Just a naive entrepreneur who thinks he is the Phoenix about to arise from the ashes.

—Dave Hannan, MD, president of the Medical Society of the State of New York

I share the view that the AMA is too conservative and obstructionist to be useful, but I am not sure there is any organization that is able to take its place. I tell myself I should become more active in the AMA so as to have a chance to change its policies and politics, but, like most physicians, those good intentions get swept away by the demands of my everyday clinical and academic work. It is not enough for us to want change, we must find ways to make it happen--and I admit I have not been able to do this.

The AMA makes money from its CPT and ICD-9 coding, which it reworks every few years. I have often wondered why the whole system cannot be replaced by... English? Why use numeric codes that must be translated into English? Why not just establish a unified English diagnostic lexicon? Because then it could not be licensed and would not require expensive training courses, meaning it would not be controlled by the AMA. Yes Sermo, no AMA!

The discussion on Sermo was huge and interesting. It essentially involved two groups: the majority of Sermo users, who are conservative, some rabidly so, decrying the AMA for being too liberal and giving away the store, and the rest of us, decrying the AMA as too conservative and obstructionist on healthcare reform. The conservatives urged membership in the American Association of Physicians and Surgeons, a fringe group in my mind, but perhaps it will become the new home of some of the AMA’s disaffected conservatives. Liberals urged joining Doctors for America, Physicians for a National Health Plan, or the American College of Physicians (I’m in all three). The bottom line is that the AMA counts less than 20% of physicians as members. Older conservatives think it’s because they’ve gone soft and liberal. I think it is very clearly the opposite: Older, whiter, more conservative and more highly paid procedure-based specialists hold too much sway and have alienated the progressives, particularly in primary care specialties such as family practice, internal medicine, and pediatrics.

Do you agree with Sermo CEO Daniel Palestrant’s claim that the AMA no longer speaks for the majority of US physicians and does a poor job of representing the interests of physicians?

Are you a member of the AMA?

Are you a member of Sermo? 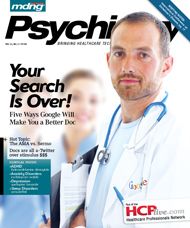 Piles of Cash
Did You Miss Our Live Webinar? The Great Debate
Saving for a Rainy Day: What is the Best Asset Protection Plan for Physicians?
Already in progress
Hot Topic: The AMA vs. Sermo
Don't Get Fooled Again: Insider's Tips on How to Tell the Difference between EHR Consultants and Resellers
5 Ways Google Can Make You a Better Doctor
Bonus or Bogus? Are federal funds for health IT a true stimulus, or merely a stopgap?
States to Obama: Give Us that HITECH Grant Money!
The Ultimate Balancing Act
Second Opinions
Related Videos
Related Content