Researchers reported that SVR12 rates in real-world, post-transplant genotype 1 HCV patients treated with ledipasvir-sofosbuvir, with or without ribavirin, is 98% across regimens and various characteristics. 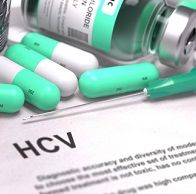 “In ION-4, ledipasvir/sofosbuvir (LDV/SOF) yielded a sustained virologic response (SVR12) rate of 96% in genotype 1, treatment-naïve hepatitis C virus (HCV) patients co-infected with HIV-1 in ION-4. Given the remarkable efficacy achieved in clinical trials, we aimed to understand real-world outcomes across a heterogeneous co-infected population,” said Douglas Dieterich, MD, of the Icahn School of Medicine in Chicago, at a presentation at Digestive Disease Week 2016, a joint meeting of the American Academy for the Study of Liver Diseases (AASLD), American Gastroenterological Association (AGA), the American Society for Gastrointestinal Endoscopy (ASGE), and the Society for Surgery of the Alimentary Tract (SSAT).

The purpose of this study was to evaluate the efficacy of LDV/SOF with or without ribavirin (RBV) for 8, 12, or 24 weeks in the treatment of a real-world population of post-transplant genotype 1 HCV patients who were co-infected with HIV. Data were collected from providers and specialty pharmacies included in Trio Health’s Innervation Platform, a cloud-based disease management program. Data providers included AcariaHealth, Allcare Plus, Aureus Health, BioCure, Encompass Rx, Islandcare, Pharmacare Hawaii, Premier, SkyeMed, and other pharmacies. All post-transplant genotype 1 HCV patients who initiated treatment with LDV/SOF with or without RBV were included in the analysis.

Out of 140 patients, only 3 patients did not achieve SVR12. Importantly, this included 1 patient who discontinued treatment, 1 patient who was lost to follow-up, and only 1 patient who was a virological failure. SVR rates did not differ significantly depending on prior HCV treatment status, with 98% of treatment-experienced and 97% of treatment-naïve patients achieving SVR. Overall SVR also did not significantly depend on whether cirrhosis was present, with 98% of cirrhotic patients and 99% of non-cirrhotic patients achieving SVR. Similarly, neither creatinine clearance (100% in patients with a creatinine clearance <60 mL/min versus 82% with a creatinine clearance of 60 mL/min or higher) nor duration of therapy, as previously discussed, affected the percentage of SVR.

“Overall, SVR12 rates in real-world, post-transplant genotype 1 HCV patients treated with LDV/SOF with or without RBV is 98% across regimens and various characteristics. RBV was used in 54% of the patients treated. The regimen duration of 12 weeks is most commonly used. Ethnicity, genotype, baseline viral load, age, treatment status, and regimen duration had no clear association with achieving SVR,” Dieterich concluded.