AF is linked with increased risks of stroke, dementia, and heart failure.

Lakkis reminded the group that AF is the most commonly sustained cardiac arrhythmia, affecting over 2 million Americans. That population includes 6% of people over 65 years old, with total costs measured in billions of dollars per year. AF accounts for one-third of all patient discharges in which arrhythmia is the principal diagnosis.

AF is responsible for 15-20% of all strokes, and the risk of stroke in AF patients increases markedly by age group, from a 1.5% risk for those 50 to 59 years of age to 23.5% in those 80 to 89. A key issue in the management of AF has been rate control versus rhythm control, or treating patients with drugs to control the rapid ventricular heart rate responsible for most AF symptoms versus attempting to restore and maintain normal sinus rhythm with cardioversion and/or antiarrhythmic drugs.

Addressing antiarrhythmic drug therapy, Lakkis said that such drugs should be used to decrease the frequency and duration of AF episodes and to improve symptoms for patients, and that AF recurrence without symptoms does not require a change in therapy. However, such drug treatments should be abandoned if they cause side effects or do not result in symptomatic improvement.

"You must ensure that the patient’s electrolyte status is normal and that appropriate anticoagulation is being administered," Lakkis said. "Initiate therapy at a low dose and titrate up as needed after evaluating drug effects on ECG parameters.”

Moving to the topic of digoxin for treatment of AF, Lakkis referenced the ARISTOTLE study, concluding that digoxin should not be prescribed for patients with AF, particularly if their symptoms can be addressed by use of other treatments. But, monitoring serum concentration for patients already on digoxin may be important, with target digoxin levels below 1.2 ng/mL.

In terms of recommendations in situations where AV node ablation may be indicated, Lakkis characterized candidates for ablation as being those with symptomatic paroxysmal or persistent AF plus failure of second-line agents and intolerance to or intolerance of medical therapy.

Other categories include younger patients with paroxysmal AF where many years of drug therapy would be undesirable, or those with congestive heart failure (CHF) due to tachycardia-induced cardiomyopathy, where drug choices are limited by the presence of CHF. Lakkis described limitations to effective treatment with patients with persistent AF (>1 year), those with left atrial enlargement (>55 mm), and those over the age of 70.

Lakkis said that patients in the paroxysmal category could expect a 70-80% success rate in achieving freedom from AF at one year following therapy, with about 30% of patients requiring two procedures to achieve this result.

“Most of these utilized a pure pulmonary vein isolation approach,” Lakkis said.

Similar success rates are seen in patients with persistent AF, although these patients more commonly require substrate modification. Some studies in those with even long-standing persistent AF have also demonstrated 70-80% freedom from AF at one year off anti-arrhythmic therapy, although with some modification of the treatment protocol.

Jean-Frederic Colombel, MD: The Commitment to Biologics for IBD 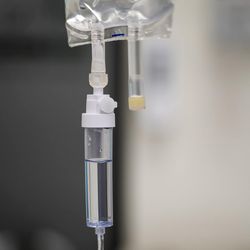