Thyroid Incidentalomas: The Ups and Downs of Registries

Incidentalomas, the tumors identified serendipitously when physicians order imaging test for a different problem, are often symptomless, and are typically found in the adrenal gland, pancreas, liver, and thyroid. 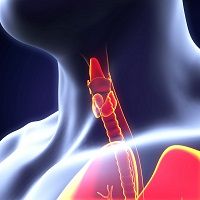 Incidentalomas, the tumors identified serendipitously when physicians order imaging test for a different problem, are often symptomless, and are typically found in the adrenal gland, pancreas, liver, and thyroid.

However, incidentalomas create a challenge because it's never clear how or when they developed, or if they have clinical significance. Some endocrinologists have suggested creating an observational registry so researchers could study thyroid incidentalomas systematically, and perhaps elucidate their natural history and monitoring requirements.

Such a registry might also help explain how thyroid incidentalomas change patients’ lives, and determine whether they create unnecessary healthcare costs.

A team of researchers from Vermont and New Hampshire noted that by age 50, half of all people have at least one thyroid nodule and at age 90, thyroid nodules become ubiquitous. The incidence of thyroid cancer has risen exponentially, although associated mortality has not. They envisioned an ideal registry to capture all incidentalomas, permit access to medical records, and allow direct contact with all affected patients over time.

They found that in one year, more than 109,000 imaging studies were performed Dartmouth Hitchcock Medical Center, in Lebanon, New Hampshire (a rural tertiary care facility) that showed an incidental thyroid finding.

Thyroid nodules were found in 125 patients — representing a reporting rate of less than 1%, which was much lower than other published estimates of thyroid incidentalomas. Of the 125 nodules, 46 were not new, but had been previously identified.

This study's design indicated that the researchers could only contact patients who had been clearly notified that they had an incidentaloma. Among the 79 patients with new nodules, more than half were not notified of the finding and in those who had been notified, 40% did not remember having been told. That left 35 patients eligible for the registry.

Twenty of the 35 patients couldn't be reached, even after multiple attempts. Six of the remaining patients had no recollection of the incidentaloma. In the remaining 9 patients, management varied.

The researchers indicated that while the idea of a registry is good, execution met with numerous logistical and ethical hurdles. A main concern was data validity because incidentalomas are incompletely identified, reported, and followed. The researchers acknowledged, alternative processes will be needed to create valid registries for incidentalomas.