Will IVF Be Successful? Check Stress Hormone Levels in Hair

â€œThere has been ongoing debate within the scientific community whether or not stress may influence fertility and pregnancy outcomes,â€ said Kavita Vedhara, PhD.

The whole in vitro fertilization (IVF) process takes about four to six weeks. Not only is this a sensitive subject for many women, but committing this sort of time only to be left disappointed can be a hard pill to swallow. Researchers from The University of Nottingham in England may have found a way to predict whether the procedure will be successful or not.

Cortisol is a steroid hormone known as the “stress hormone.” As the nickname suggests, it helps the body manage stress, as well as assist the body use sugar and fat for energy. In addition to stress, cortisol is affected by factors such as diet, exercise, and caffeine.

“There has been ongoing debate within the scientific community whether or not stress may influence fertility and pregnancy outcomes,” lead author Kavita Vedhara, PhD, a professor at the university’s School of Medicine, said in a news release.

So does cortisol actually have an impact on reproductive outcomes? Yes, and this is the first study to provide proper evidence on the matter, as described in Psychoneuroendocrinology.

The team recruited 135 women from a fertility clinic in Nottingham. The women underwent IVF treatment at some point between December 2012 and April 2014 — and 60% became pregnant. Cortisol levels were measured from saliva samples at three points over two days: on waking, 30 minutes after waking, and at 10 p.m. at night. Hair cortisol samples were collected from 88 of the women.

The findings indicated that short-term salivary cortisol levels were not associated with pregnancy. Hair cortisol levels, however, made up 27% of the variance in pregnancy outcomes — after controlling for other factors such as age, body mass index (BMI), number of eggs retrieved, and number of eggs fertilized.

The takeaway message here is that elevated cortisol levels were linked to an almost one-third less chance of conceiving.

Now do these results mean that managing cortisol levels properly will lead to fertility? Not exactly. After all, other factors impact cortisol besides stress. But as Adam Massey, PhD, from the university’s School of Medicine explained, “…optimizing patient’s chances of IVF success is key and this research suggests that reducing cortisol in the months prior to treatment may play an important part in conception.” 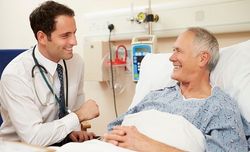