Heads up Broncos and Panthers fans! You might want to load up on the vitamin C and hand sanitizer. 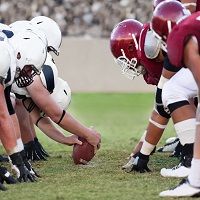 Heads up Broncos and Panthers fans! You might want to load up on the vitamin C and hand sanitizer.

Every year millions of football fans (and those who just love the commercials) gather for the most-watched show in television — the Super Bowl. While die-hard fans brave through months of close games, bad calls, and nail-biting endings, there’s one reason that you may not want your team to be battling for the Vince Lombardi Trophy.

A new study from Cornell University found that the geographical areas which have a NFL team move on to the Super Bowl experience a spike in flu-related deaths in older patients. And what’s to blame for this phenomenon? The increased socialization gives the infection the perfect opportunity to spread.

“You have friends over for a Super Bowl party. You all go out to a bar to watch the game. A bunch of people are cramped in a small space, and they’re all touching the same napkins and grabbing the same chips. If your team wins, you’re all out in the street celebrating. It’s that kind of disease transmission that we think might be a driving factor,” Nicholas Sanders, PhD, from Cornell, said in a news release.

The team evaluated death records, weather, and population from Super Bowls between 1974 and 2009. There was an 18% spike in flu-related deaths in people ages 65 and older in areas which had a team advance to the Super Bowl. This correlation was even more prominent when the game took place closer to the peak of flu season or during the years where the dominant influenza strain was more virulent.

There wasn’t a surge in flu-related deaths in cities that actually hosted the Super Bowls, just in the places where the team originated, according to the report in American Journal of Health Economics. So if you're headed to the San Francisco Bay Area, you're safe this year.

There are various ways that the virus could be transmitted, and the older population is one of the most vulnerable to sickness. The findings don’t mean that older people are out at bars and directly interacting with the risk of illness. It could be as simple as a family member going out, catching the flu, and passing it on.

“Simply being aware of the situation can make people take common-sense precautions, and say, ‘Well, I’m not going to shove my hand in that bowl of nuts over there.’ I think that’s just good advice in general,” Sanders concluded with wise words.

Hey Texans, Browns, Lions, and Jaguars fans — aren’t you guys happy that your teams have never been to a Super Bowl?

What to Read Next >>> Concussions in the NFL: An Interview with Brain Injury Expert Joseph F. Waeckerle, MD