According to the Centers for Disease Control and Prevention, colorectal cancer is the second leading cancer killer in the United States, affecting both men and women.

According to the Centers for Disease Control and Prevention, colorectal cancer is the second leading cancer killer in the United States, affecting both men and women. In 2005, the latest year for which data is available, 141,405 people received a colorectal cancer diagnosis and more than 53,000 died from the disease. Until the mid-90s, the only approved agent for treating this cancer was 5-fluorouracil (5-FU), and although other agents are now readily available, 5-FU is commonly the backbone of combination chemotherapy.

While calculating body surface area (BSA) is the standard of care for determining a patient’s infusional 5-FU dose, BSA measurements often fail to identify the optimal dose because they do not consider the countless factors beyond height and weight that affect 5-FU metabolism and efficacy. Now oncologists who administer a 5-FU-based treatment regimen can use a simple blood test, distributed by Myriad Genetic Laboratories, to individualize this therapy for their colorectal cancer patients, ensuring an optimal dose is administered in this population. The blood test, called OnDoseTM, was launched in April 2009 and could be used in about 175,000 patients in the United States.

The side effects of 5-FU treatment can be severe and may include diarrhea, mucositis, dermatitis, cardiac toxicity, and myelosuppression. In rare cases, these toxicities can result in death, especially in the setting of a dihydropyrimidine dehydrogenase (DPD) deficiency, an autosomal recessive metabolic disorder that results in absent or significantly decreased activity of DPD, an enzyme that metabolizes uracil and thymine. Recent studies suggest that 8% of the general population may have at least a partial DPD deficiency; thus, a rather substantial number of patients with colorectal cancer could be at risk of adverse events when only BSA calculations are used to determine their 5-FU dose.

Blood levels of 5-FU have been found to exhibit a 10- to 50-fold variability between individuals despite equal dosing. This is because many factors affect 5-FU metabolism and efficacy, including age, race, sex, genotype, drug-to-drug interactions, and disease state, yet current standards of care focus only on height and weight through BSA calculations to determine dose. In a 2008 article by Gamelin and colleagues, published in the Journal of Clinical Oncology, the authors noted that up to 85% of patients are not dosed optimally using the conventional BSA dosing method, which places these patients at increased risk of toxicities, premature treatment termination, disease progression, lack of therapeutic response, and higher treatment costs. OnDose allows oncologists to rapidly assess their patients’ 5-FU blood levels and exposure to 5-FU during infusion, helping to dose them more optimally.

OnDose requires a small peripheral venous blood sample to be taken during steady state, between two hours after the start of a continuous infusion to the end of the infusion, provided the infusion pump is still running. The sample is then centrifuged to extract a 1-mL plasma sample from the collected blood. The plasma is frozen overnight (minimum temperature, -15°C) and then shipped to Myriad labs in a supplied cold shipping container the next business day for analysis. The sample is assessed using a competitive homogenous two-reagent nanoparticle agglutination immunoassay, and the results are returned to the clinician within 7 days. A quantitative target range is outlined in the report, and the clinician can then adjust the patient’s next dose, if needed, to achieve a 5-FU blood level in this range. The test is conducted each cycle of treatment until the patient achieves a 5-FU level in the target range and maintains a level in this range for three treatment cycles, after which the test can be performed every three cycles.

The OnDose list price is $300 per test, but the test has been added to the majority of contracts with public and private insurers, which now provide coverage for the test. There are also options for uninsured patients and those whose insurance may not cover the test. For the latter group, Myriad offers the OnDose Patient Protection Program, which limits the out-of-pocket costs of qualified patients to 20% of Myriad’s billed charges after the patient’s deductible has been met. The OnDose Patient Protection Program is not available to patients covered under Medicare, Medicaid, or other government programs, or those residing in states where such programs are prohibited, including Florida, Massachusetts, Texas, Minnesota, and Rhode Island. Some patients who are uninsured and meet established clinical and financial criteria can receive the test free through the Myriad Financial Assistance Program (MFAP). Eligibility requirements for the MFAP program can be found at www.myriadtests.com/provider/reimr.htm.

In 2008, the Journal of Clinical Oncology published a phase III, multicenter study that compared BSA-based dosing of infusional 5-FU plus folinic acid (leucovorin) with PK-guided dose adjustment . The study randomized 208 patients with measurable metastatic colorectal cancer to an arm in which the 5-FU dose was calculated based on BSA (n = 104) and to one in which the 5-FU dose was individually determined using pharmacokinetically (PK)-guided adjustments (n = 104). The initial regimen was 1,500 mg/m2 of 5-FU plus 200 mg/m2 of folinic acid administered via infusion once weekly during a continuous 8-hour period. The 5-FU doses were adjusted weekly in the PK-adjusted arm based on a single-point measurement of 5-FU plasma concentrations at steady state until the therapeutic range was reached.

An intent-to-treat analysis of the 208 patients showed the objective response rate was 18.3% in the BSA arm and 33.7% in the PK-guided arm (P = .004). The PK-guided arm also had a greater median overall survival than the BSA arm (22 months versus 16 months, respectively; P = .08) and fewer toxic adverse events (P = .003). Based on these findings, the authors concluded that there is value in PK-guided therapy of patients with metastatic colorectal cancer receiving 5-FU therapy.

In a Myriad press release, Edward Chu, MD, deputy director of the Yale Cancer Center in New Haven, Connecticut, noted “the introduction of OnDose is a new and vitally important advance in cancer care,” stating that “for the first time, a fast and accurate method of measuring and monitoring 5-FU blood levels will now be accessible to the practicing oncologist.” For more OnDose information, visit Myriad at www.myriadtests.com.

Lisa LaMotta is a freelance writer from New Jersey. She has written for Forbes, Fast Company, PRWeek, and New York Press. 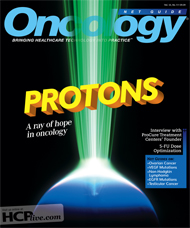