The American Society of Hematology debuted its Health Equity Rounds series, which are interactive, case-based discussions with an interdisciplinary panel to include hematologists, health equity/public health experts, patients, and patient advocates.

“How do we solve a problem like sickle cell? What is necessary in today's world? What is the most necessary component?”

These are the questions that Titilope Fasipe, MD, PhD, Assistant Professor of Pediatric Hematology-Oncology, Baylor College of Medicine, asked this year, while speaking at conferences or during conversations with colleagues.

“It's so interesting that the overwhelming response is advocacy,” she said in an interview with HCPLive®. “It's not like, ‘oh, we need this drug, or we need to cure everybody.’ It actually ends up being the answer of advocacy.”

Leading the Charge with Education and Vulnerability

Fasipe has a unique perspective in the field of sickle cell disease and hematology, as an expert and as an individual living with the disease herself, and this year she has spoken at the National Organization for Rare Disease (NORD) Summit and the 2021 American Society of Hematology (ASH) Annual Meeting & Exposition.

She has come face to face with the obstacles that she sees her own patients encounter because of stigma. This is what empowers her to be vulnerable and share her own experiences.

“I think the historical plights of sickle cell include many words, and some of them are newer to our lexicon,” Fasipe explained, “like the concept of implicit bias, and systemic racism, systemic injustice, the concepts existed, but I don't think we knew those words pre 2020.”

Education and awareness are crucial in combating implicit bias and racism, both on an individual and systemic level. The past year has produced research, demonstrations, and conversations to do just that.

As a plenary speaker at the 2021 NORD Summit as well as a presenter at the 2021 ASH conference, she saw how many of the national leaders, like the National Institute of Health (NIH), US Centers for Disease Control & Prevention (CDC), and US Food and Drug Administration (FDA), were teaching and being candid about what it takes to help treat and advocate for various diseases–it had a meaningful impact on Fasipe.

"What you have at the summit is a true bringing together of expert minds," Fasipe said. "The things that I feel the most energized about are when I see the national leaders coming forth and standing by rare disease."

She explained that NORD and ASH have been very supportive of diversity initiatives. The meetings this year served as a sort of training ground, according to Fasipe, that address the obstacles that come with treating or advocating for patients who need it.

“Historically, most people have a very dark view of sickle cell, whether it was personal tragedies, with loss, losing loved ones, or whether it involved understanding this historical struggle of sickle cell disease and all the elements of that.” Fasipe said. “And I think it's sometimes hard to see the good, or the progress, because you're so overwhelmed by the things that have not been going well.”

“For all the changes that we've seen, for sickle cell disease,” she continued, “even though they're few, all of them came as a result of advocacy. Advocacy brings that strength and power, it opens up doors.”

The biggest obstacle is the unfortunate prejudice regarding sickle cell patients, according to Fuad El Rassi, MD, Associate Professor of Hematology and Medical Oncology at Emory University School of Medicine, and the Director of Sickle Cell Disease Research at the Georgia Comprehensive Sickle Cell Center at Grady Health System.

“I've had patients who, you know, were not believed to have sickle cell, because their hemoglobin was not low, for example” El Rassi said in an interview. “I've had patients who really were in true pain, and were deemed not to be in pain by emergency doctors or other providers.”

While these examples may seem like individual instances, they’re symptoms of a larger problem.

“It really goes down to bottom line, systemic racism over the years, that has led to having this underserved population not really listened to, and not really well advocated for,” El Rassi explained.

Okwo identifies as a “Sickle Cell Warrior” because it takes a lot to deal with the disease.

“It is a battle every day,” Okwo shared in an interview with HCPLive®. “A lot of that battle is unseen, and what I think not everyone necessarily always appreciates, is someone with a condition like this–we usually fake well, more than we fake sick.”

Individuals in the sickle cell population deserve better, and they certainly encounter hindrances when advocating for proper care, but they are strong, they are warriors, and they are leading the fight for change.

“We ultimately wanted to help, perhaps, change hearts and minds around how we are seen as sickle cell patients when we enter a clinical setting,” Okwo said.

El Rassi shared that he thinks this is a great time to change this prejudice with community organizations, academia and industry working together to advocate for the sickle cell community. 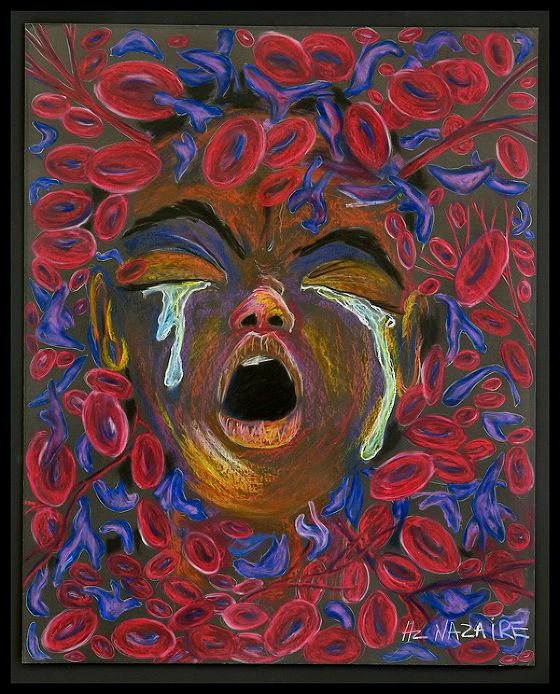 In an interview with HCPLive®, Maureen Achebe, MD, Brigham and Women’s Hospital, explained that when people think of advocacy, or inclusion, in healthcare, sickle cell disease comes to mind because it predominantly affects African Americans.

“Sickle cell disease is sort of the poster child of the diseases that have been impacted by structural racism and implicit bias,” she said.

The topic of racial diversity and inclusion is still paramount in 2021. On a societal level, awareness and educational initiatives have facilitated progress, but discrimination persists in a variety of ways.

“As US institutions have focused on diversity and inclusion, sickle cell disease has benefited from that,” Achebe said.

The American Society of Hematology debuted its Health Equity Rounds series at their 2021 annual meeting and exposition this December. The first 60-minute session was “Stigma and Bias in Sickle Cell Disease”.

According to the ASH website, Health Equity Rounds are interactive, case-based discussions with an interdisciplinary panel to include hematologists, health equity/public health experts, patients, and patient advocates to discuss health equity issues within hematology in bi-monthly webinars.

“The problems are not new,” Achebe said, “but institutions and people outside of the sickle cell community have had space in their lives to listen and actually think about what we’re offering different individuals in our country.”

Understanding implicit bias is crucial to moving toward the quality care that each patient deserves.

According to research presented at the ASH 2021 Annual Meeting by Nabil Abou Baker, MD, General Internal Medicine, University Chicago, individual or personal strategies can be used to effectively address implicit biases. And addressing these implicit biases can help decrease the negative impact they have on patients with sickle cell disease.

“Literature continues to show that patients suffer from their pain being discounted during hospitalizations,” investigators wrote about patients with sickle cell disease.

The results found a range of initial thoughts reported by the residents including: failure, suspicion and opioids, pity and boring admission, chronic pain and dread of confrontation, and frustration, with an average belief of 7/10 in that thought.

Initial emotions reported by the residents included: frustration, sadness, shame, guilt, worry, and pessimism with an average belief of 5.5/10 in that emotion.

“This training is not enough for addressing all the faults in the medical system that perpetuates biases and health inequities toward patients with SCD,” investigators wrote. “It can be used to supplement other methods such as education about influences and patient outcomes, increasing awareness, and making systemic changes.”

Fasipe believes the emphasis should be on expanding health policy to be more inclusive and beneficial to the sickle cell population. While there is still work to be done, this year had a few important milestones that have been in the works for years.

The CDC appropriated $2 million in 2021 for sickle cell data collection. This expanded the CDC’s established population-based surveillance system to collect and analyze longitudinal data about people living in the US with sickle cell disease.

At the start of this program in 2018, only California and Georgia fully implemented the data collection due to limited funding. In 2019, $1.2 million in funding was provided to include 7 additional states to begin participation.

The US Department of Health and Human Services (HHS) contributed approximately $3 million in 2020 to help fund the CDC program. This helped to begin or expand the collection of data in multiple states.

“The CDC, well, their success was in 2 of the 50 states,” Fasipe explained. “So the other 48 are now trying, and because of that new money, they were able to add 7 more states. So, now 9 states, and the goal is to expand that even further so that more, and more states will be able to participate.”

According to the HRSA website, this funding went toward increasing the number of knowledgeable providers for sickle cell disease treatment as well as improving the quality of care for patients and the care coordination among providers.

“So, yes, many of these successes, they're huge, they're big deals,” Fasipe said, “but they're still on the smaller scale when we think of all the people in this country that need better healthcare, and better quality of life. We definitely have room. We have room to go, but it is exciting to see progress in action and what that looks like.”

“There's 100,000 people in this country with sickle cell disease, and there is no national funding agenda to support their entire life,” Ify Osunkwo, MD, MPH, of the Sickle Cell Disease Enterprise, Levine Cancer Institute at Wake Forest School of Medicine, said in an interview.

She explained that if the government created a funding agenda for healthcare coverage for patients with sickle cell disease, it would save the US money and improve the disability rates of a lot of these patients.

A single patient with sickle cell disease can cost up to $2 million a year. Without a comprehensive way of supporting these patients from birth to death, they continually end up getting treatment in acute care systems.

The solutions are simple, but it requires a certain level of advocacy, according to Osunkwo. The coordination of care needs to improve.

If you’re born with an illness that is known to cost a lot of money, shorten your life expectancy, impact your family, jeopardize your academic and professional capabilities, Osunkwo asked, why wouldn’t we invest in that?

During her presentation at the 2021 ASH Annual Meeting, Fasipe explained that there are 4 elements of care–research and clinical trials, access to care, training and professional education and global issues–that need to be invested in to focus on the right path.

“So, if you only define the problem as, sickle cell is a blood disorder and these bad red blood cells need to be fixed, you're always going to have a limited scope of what sickle cell disease is,” Fasipe said.

The problem needs to be redefined to uncover the aspects that demand attention, and that’s what’s been happening this year, according to Fasipe. Now, effective solutions to the true problems can be the focus of improving quality of life and care for patients with sickle cell disease.

“It's almost like we're scratching the surface and we have room to go, the momentum is now building,” Fasipe said. “And we have great examples of what happens when things do work well, and use those as a role model to help the rest of us.”